The Lancia Kappa (or Lancia k ) was an upper middle class vehicle produced by the Italian automaker Lancia from summer 1994 to mid-2000 .

The vehicle was available as a four-door notchback sedan, five-door station wagon and two-door coupe. It bears the name of a historical model that was built from 1919 to 1922. Like many Lancia models, it was named after a letter from the ancient Greek alphabet.

The Kappa was the top model in the Lancia program as the successor to the Thema from August 1994 and came onto the market after a particularly long development period, which was intended to prevent all defects from the outset and ensure a high level of quality.

The spelling Lancia k was fixed and the Italian language Lancia Kappa in all languages .

The Kappa limousine was designed by the in-house design department Lancia Centro Stile in collaboration with the Turin-based design company IDEA. The car was set up on the platform called internally "D". In contrast to the organic design that was fashionable at the time, the shape appears more classic. The rear was dominated by the rear lights divided by the trunk lid, a flat rear window and a large bumper in the same color as the car.

The equipment of the Kappa was extensive and included, among other things, a height and length adjustable steering wheel and a radio antenna integrated in the rear window, check control system, air conditioning (depending on the version), velor upholstery ( Alcantara or leather from Poltrona Frau on request), ABS , double airbag . There were three equipment variants at market launch: LE, LS and LX. The radio models of the first series were from Clarion and kept in the same design as the air conditioning controls. It was unusual for the time that people also thought about the smells of the plastics in the new car and installed an odor neutralizer in the form of a special cushion under the seat. The effect lasted half a year, as long as the plastics evaporate.

A version with an extended wheelbase, which included a two-part B-pillar with additional windows, was produced in five copies exclusively in the color dark brown, two of which had a vinyl roof and were used by the management of the Fiat group. Two of the other three examples still exist, all four vehicles are now in the hands of collectors, at least one of them in Switzerland. Each copy differs from the others in details.

Like its predecessor, the Thema SW, the station wagon version of the Kappa was designed and built by Pininfarina.

The Kappa SW was introduced in June 1996 and had a special feature of a matt anodized chrome strip on the roof edge, which in the area of ​​the C-pillar followed the door cutout a little and at this point bore the Pininfarina logo that had designed the station wagon. In the Turbo models, the roof molding was anodized in dark gray matt and the door handles were painted in the same color as the body, as in the Coupé and Sedan.

9,193 copies of the Kappa Station Wagon were made. 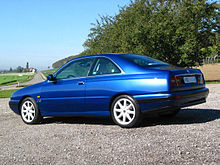 The Kappa Coupé was manufactured from January 1997 to March 2000 by the Italian bodywork company Maggiora .

The sedan and coupe are identical up to the A-pillar, the rest of the body has been redesigned. The rear window runs smoothly to the rear and is flanked by two indicated tail fins. They are supposed to be reminiscent of the design of the Lancia Flaminia Coupé from the 1960s.

The interior featured Recaro seating in Alcantara as standard . Leather upholstery from the Italian manufacturer Poltrona Frau , in which twelve color variants could be selected ("Kaleidos Leather"), could be ordered as an extra.

The Carrozzeria Maggiora in Chivasso produced a total of 3271 copies of the Kappa Coupé. It is one of the rarest mass-produced vehicles.

In May 1998 the Kappa series underwent a slight revision. The most important innovation represented the two new engines: a two-liter five-cylinder petrol engine with turbocharger and an output of 220 hp and a 2.4 liter turbo diesel with common rail - direct injection , which made 136 hp. There were also side airbags and a radio navigation system from Blaupunkt (only in Germany) as standard.

Bumpers painted completely in the same color as the car, high-gloss imitation burl wood and a dashboard in an anthracite color made the vehicle look more modern and high-quality. New extras were cruise control and xenon headlights .

The "LE" variant was omitted, although aluminum rims, fog lights and Alcantara upholstery were still not standard in the basic version. New was the "Turbo Line" for the Turbo, which was characterized by dark anodized window frames, perforated Alcantara upholstery and door handles painted in the same color as the car.

There were accessories from the LineaAccessori program for the Lancia Kappa , such as roof racks , wooden gear knobs , adjustable dampers and the following rims:

Furthermore, the rims AZEV-B-Design , AZEV-C-Design and Borbet-D-Design were offered ex works , which were not kept in the Lancia design.

A parking aid called LOP was announced and presented, but it never went into production. With it the rear wheels were raised, and the car was rolled sideways into the parking space.

Its successor became from March 2002 the notchback sedan Lancia Thesis , whereby the Kappa SW and the Kappa Coupé remained without successors.

The limousine was government vehicle in Italy and Poland. In 2002, the Kappa was the most common vehicle used by Italian politicians, ahead of the Alfa Romeo 166 . Václav Havel privately drove a Kappa as a 2.0 16V from 1997 to 2006, after which the car went into a private collection. A prominent owner of a Kappa 3.0 in Germany was Joschka Fischer .

Giovanni Agnelli used an extended kappa (with inserted center piece) as a company car. The front seats were covered with blue leather, the rear seats with fabric, since Agnelli did not like leather seats. There were particularly large ashtrays on the rear doors.

1 Values ​​in round brackets ("()") for automatic transmissions