The Lancia Ypsilon (type 846), or in some countries called Lancia New Ypsilon , is a small car made by the Italian automobile manufacturer Lancia .

The vehicle is the successor to the Lancia Ypsilon of the same name and was presented at the 81st Geneva Motor Show in March 2011 . It was sold in Europe from June 2011 and in Germany from July 2, 2011. From September 2011 the car was also sold under the Chrysler brand in Great Britain and Ireland . At the same time, the three-door predecessor continued to be built and sold in some European countries.

At the end of April 2017, Lancia stopped exporting the vehicle. Since then, the Ypsilon has only been available on the Italian home market.

With the introduction of the first series (back then as the Y10 ) in the early summer of 1985, Lancia established the segment of luxury / lifestyle small cars. After all previous Ypsilon models were built exclusively with three doors until 2011, the new Ypsilon (internal: Type 846) is only offered as a five-door model. The rear doors were optically concealed by the positioning of the handles at the end of the window strip, which rises significantly towards the rear.

The "New Ypsilon" receives the new radiator grille, with horizontal struts tapered in the middle. The fourth generation of the Ypsilon was designed in the Centro Stile Lancia and follows the design language introduced with the Delta III .

16 different finishes are available, including four bi-color finishes. Here, the bonnet, the roof and the spoiler attachment on the tailgate are painted in a different color than the rest of the body. Compared to its predecessor, the vehicle has become three centimeters longer (3.84 m), one centimeter lower (1.52 m) and almost two centimeters narrower (1.68 m). The wheelbase remained unchanged.

The Ypsilon has LED taillights and daytime running lights on the front. Bi-xenon headlights with headlight washers are optionally available. The smart fuel system is a novelty, which eliminates the need to screw the fuel filler cap. The tank is automatically opened and closed by hanging or pulling out the nozzle. 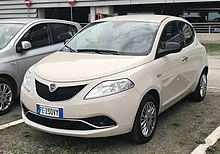 At the end of 2011, the engine range was expanded to include a variant of the 1.2-liter engine under the name Ypsilon Ecochic , which can also be operated with LPG . A year later, the manufacturer added a CNG- powered variant of the 0.9-liter drive to its range.

At the IAA 2015, Lancia presented a facelift for the Ypsilon. In addition to a revision of the front design, this includes a modified interior design. In addition, two new colors and the Uconnect infotainment system, which was previously not available in the Ypsilon, were introduced.

The seats can be covered with fabric, “Castiglio” microfiber or a fabric / leather combination. Depending on the equipment and the seat upholstery, the door panels are sometimes covered with synthetic leather or natural silk. It is probably unique in this vehicle class that part of the dashboard is also covered with textile or synthetic leather. There is a choice of a rear bench seat with two seats that can be folded down in a 50:50 ratio or a three-seat bench that can be folded down in a 60:40 ratio.

This section is still missing the following important information:
Is it standard or special equipment?
Help Wikipedia by researching and pasting it .

The equipment of the Ypsilon is extensive for this vehicle class. There are u. a. Automatic air conditioning, fog lights, cruise control, trip computer, leather steering wheel with multifunction buttons, audio system with radio and MP3 / CD player, "Blue & Me" system with voice control, light and rain sensor, rear parking sensors and various 15 or 16-inch alloy wheels, some of them too in bi-color design. There is also a so-called 360 ° sound system with 500 watts, a "Blue & Me-TomTom2" navigation system and a semi-automatic parking assistant "Magic Parking". A large “Granluce” sliding glass roof is available for the Ypsilon. This sunroof takes up almost 70 percent of the headliner and consists of two glass panels (one fixed and one movable) and two sun blinds that slide independently of each other towards the center of the roof.

There are three equipment lines (Silver, Gold and Platinum) as well as changing special models.

All gasoline and diesel engines in the Ypsilon are equipped as standard with a start & stop system and also have a switching point display.

Since the start of sales, two Otto engines have been offered, namely the 1.2 8V and the 0.9 TwinAir 8V two-cylinder engine. All engines meet the Euro 5 emissions standard.