The Lancia Fulvia is an automobile made by the Italian manufacturer Lancia . The vehicle was built from autumn 1963 to early 1976 and is considered the successor to the Lancia Appia .

Like other Lancia models after the Aurelia presented in 1950 , the Fulvia was named after a classic Roman road - here the Via Fulvia .

The Fulvia was available as a Berlina ( sedan ) and as a coupé . As is usual with Lancia, there was also a hatchback coupé with the traditional name Sport, designed by Carrozzeria Zagato and built in small series . The technical concept of the Fulvia comes from Professor Antonio Fessia , the shape of the sedan and the Fulvia Coupé was designed by Pietro Castagnero in Centro Stile at Lancia. The Lancia Fulvia Sport on the technical basis of the coupé was drawn by Ercole Spada at Zagato .

The Lancia Fulvia was based on the larger Lancia Flavia that appeared in the fall of 1960 . For the first time, both models had front-wheel drive , which was very advanced at the time, and clear straight lines. All Fulvia models had disc brakes, and an elaborate chassis ensured excellent road holding.

In autumn 1972 the naming system was changed according to Roman roads: the successor to the Fulvia, built under Fiat management , was the Lancia Beta .

At the market launch in autumn 1963, only the four-door sedan was available. In the spring of 1965, the filigree coupé was presented as a supplement, which was also used in a special rally version for many years in racing and also won titles.

From the end of 1965, the Lancia Fulvia Sport designed by Ercole Spada at Zagato was available on the basis of the factory coupe.

At the Turin Motor Show in March 1965, Lancia presented the elegant Fulvia 1.2 Coupé. With its timeless, graceful design, the Fulvia Coupé is considered the masterpiece of Pietro Castagnero. The Fulvia Coupé was based on the sedan's floor assembly, which had been shortened to 2330 mm wheelbase. With an engine enlarged to 1216 cm³ with 59 kW (80 PS) at 6000 rpm, an improved chassis, a weight of just 960 kg and a Cd value of 0.39, the coupé of the first series reached a speed of 160 km / h. From the spring of 1967 to the end of 1969 there was the Fulvia 1.2 Coupé with unchanged performance with a 1231 cc engine.

At the beginning of 1966 the coupé Fulvia 1.2 HF went on sale. The 1216 cm³ engine now developed 65 kW (88 hp), the weight was reduced to 825 kg by aluminum hoods and Plexiglas panes. The series of sporting successes of the Fulvia series began with this model.

Both versions now had a five-speed gearbox and alloy wheels and weighed 850 kg. The Fulvia 1.6 HF was nicknamed "Fanalone" because of the large headlights.

The third body variant of the Fulvia was designed by Ercole Spada at Zagato on behalf of Lancia: the end of 1965 presented Lancia Fulvia Sport, a coupé that was visually completely different from the other variants. All versions of the Fulvia Sport are handcrafted in the Terrazano di Rho factory. The Turin-based supplier Ellebi pressed some sheet metal parts . Mechanically identical to the Fulvia 1.2 Coupé, improved aerodynamics, a weight-reducing aluminum body and a modified gear reduction ensure driving fun and a higher top speed. With a weight of 915 kg, the Fulvia Sport of the first series reached 169 km / h.

As in the extravagant Flavia Sport, the rear window of the somewhat more conventional Fulvia Sport could be opened electrically to ensure good ventilation of the interior.

The further development of the Coupé also had an impact on the Fulvia Sport: In 1967 the Fulvia Sport 1.3 came with the 87 hp engine enlarged to 1298 cm³. The first 709 vehicles of the Fulvia Sport 1.3 still received the aluminum body. The later had a steel body, hoods and doors were made of aluminum. This led to an additional weight of 20 kg with significantly better stability.

On October 24, 1969, Fiat took over the Lancia company. Despite a lot of restructuring, the three variants of the Lancia Fulvia continued to roll off the production line, while at the same time being visually and technically revised.

The Fulvia limousine, which was presented shortly after the takeover, had some technical changes, mainly affecting the braking system. Instead of the Dunlop system, the revised model now had an improved Lancia / Girling super duplex brake system, a two-circuit brake system whose first circuit comprised the rear wheel brake cylinders and two of four brake cylinders on the front axle and the second circuit comprised the other two cylinders on the front axle. From 1970 all models of the second series also had a five-speed gearbox.

Externally, a modified radiator grille with black ribs, a modified light surround and the oval taillights were the most noticeable features of the modified Fulvia. The bumpers received a rubber lip. The rear doors received a walkway to make the windows easier to lower.

The inside of the dashboard has been fundamentally revised. From then on, conventional round instruments were used. The heating / ventilation control has been changed. The seats and upholstery have been changed. There were fastening points for belts for the rear seats. In the course of the construction of the second series, the ashtrays for the rear passengers also moved from the front seat backs into the doors.

In October 1972 the production of the sedan was stopped. The hatchback Beta is the successor .

Based on the sporting successes of the 1600 HF Coupé, the two special models “Montecarlo” and “Safari” were produced on this basis. Both differ from the production model in only a few equipment details due to slight adaptations to the body (rear wheel arches). However, all three models had the same seats with integrated headrests ("1600 HF seats").

The Coupé 1600 HF Lusso offered a lot more than the slimmed-down Competition model 1600 HF: front and rear bumpers with lights and indicators, chrome-plated window frames at the front and rear, triangular vent windows, door lights, side panels in the interior, carpet and floor mats (in addition to the rubber mat set ), Spare wheel cover, forward-folding backrests of the driver's seats, armrests and door handles, insulation material and cladding (anti-drumming mats).

The last variant was the Fulvia 3, which was built from spring 1975 to early 1976, and can be distinguished from the Fulvia 1.3 S by the stylish white-highlighted instruments. In this model, however, thinner sheet metal was used (0.5 mm instead of 0.7 mm).

The Fulvia Sport 1.3 S was manufactured between mid 1970 and late 1972. Mechanically, the car was identical to the 1.3 S Coupé of the second series. The somewhat simplified Zagato body was now made entirely of steel . Despite the increased weight of 960 kg, the Fulvia Sport reached 180 km / h.

The Fulvia Sport 1600, powered by the well-known 1584 cm³ engine of the 1600 HF, was a bit more comfortable: it was the only Fulvia with electric window lifters. It can be distinguished from the Fulvia Sport 1.3 S by the recessed door handles and a matt black stripe on the bonnet. With its 114 hp engine, the car accelerated to 190 km / h.

The coupe version of the Fulvia was also built in a special version for rallying . The Lancia Fulvia Coupé Rallye 1.6 HF was equipped with a 1584 cc engine with 132 hp at 6600 rpm and a 5-speed gearbox. The vehicle took part in the World Rally Championship from 1969 , which the Lancia team won with this car in 1972. In the same year, the Lancia works team with Sandro Munari at the wheel also won the renowned Monte Carlo Rally .

The power of the 1584 cm³ engine had meanwhile been increased to 158 hp at 7200 rpm. With its low weight of 830 kg and its front-wheel drive, the Fulvia Coupé was a strong opponent for the Porsche 911 and Renault Alpine. The drive concept of the Lancia was superior to that of the more powerful rear-wheel drive vehicles, especially on bad slopes, and ensured the small coupé many victories.

After the introduction of the legendary Stratos HF in 1972, the Fulvia was withdrawn from the factory rally team. One of the last races of a Lancia Fulvia Coupé was the 1974 Safari Rally: Munari / Drews took third place. The almost innumerable outings of the Fulvia Coupé from November 7, 1965 to April 14, 1974 ushered in Lancia's decades of dominance in rallying.

In addition to the factory cars Lancia Fulvia Coupé Rallye 1.6 HF, which were successful in rallying, there were racing cars with aluminum bodies manufactured by Zagato in 1968: 27 Lancia Fulvia Sport Competizione and two other vehicles that later became known as the Sport Daytona.

The 27 racing cars of the 818332 series were used by private drivers in many local competitions in Italy with great success in the following years.

The two Lancia Fulvia Sport Daytona were modified for races in the USA and were given double headlights under Plexiglas hoods that corresponded to the regulations in force there, were made easier by the use of Plexiglas for the side and rear windows and were given engines with 155 hp performance. In 1969 these two vehicles took part in two endurance races in the USA with factory support. On February 2 and 3, 1969, Claudio Maglioli and Raffaele Pinto won the 24-hour race of Daytona in their Lancia Fulvia Sport Daytona in the class of sports prototypes up to 2 liters and came 11th overall. At the Sebring 12-hour race on March 22, 1969 , Maglioli and Pinto achieved 18th place in the overall standings. 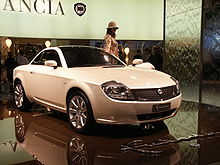 In 2003 Lancia presented a study , which in turn was named Fulvia . The sports coupé was powered by an 1800 cc engine with four cylinders and 16 valves. The output of 103 kW (140 PS) was similar to that of the most powerful HF coupés. The body was made entirely of aluminum and, in conjunction with modern aerodynamics, enables a top speed of 213 km / h.

The basis of this study was the Fiat Barchetta , whose end of production was already foreseeable. That is why this vehicle did not go into series production despite the consistently positive response from the public.