The Lancia Ypsilon (type 843) was a small car produced by the Italian car manufacturer Lancia .

The vehicle was the successor to the Lancia Y and was presented at the Geneva Motor Show in March 2003 and was sold in Europe from October 2003.

The successor to the Ypsilon was introduced in June 2011 and sales of this type in Germany were discontinued at the same time.

However, it continued to be produced in Sicily for the Italian, French, Austrian, Portuguese and Spanish markets until the Lancia Termini Imerese plant was closed towards the end of November 2011 .

The design of the Lancia Ypsilon comes from the Centro Stile Lancia was an evolution of the design of the Lancia Y . According to Lancia, some stylistic elements have also been adopted from the design of the Lancia Thesis , Lancia Ardea and Lancia Appia . The result was a three-door hatchback sedan which, compared to its predecessor, has grown by five centimeters in length and, above all, in height by almost 10 cm. With a height of 1.53 m, the model was one of the tallest cars in the small car class, resulting in a slightly higher seating position and easier entry and exit. Since the Ypsilon was only built as a three-door version, Lancia has included the slightly longer minivan Lancia Musa in the model range as a replacement for a body version with five doors for customers who prefer a smaller five-door car .

In 2004, the design was honored with the “European Automotive Design Award” and won the title “L'Automobile più Bella del Mondo” in the small car category.

While the predecessor Lancia Y could still be ordered in over 100 paint finishes, the Ypsilon was offered in a common color selection. However, rarer paint colors were also regularly offered, such as ivory, orange, yellow, various shades of brown or pink. Especially with the two-tone paintwork ("Bi-Colore") that has been available since 2004, the car looks individual to extravagant. With these “bi-color” paintwork, a high-gloss or matt paint in a different color was applied to the roof, the exterior mirrors and the tailgate. In the special “Versus” model, Versus lettering was applied to the roof and tailgate using the screen printing process. With the model revision, various light alloy rims in two-tone versions were added to the range. These parts of the rim are polished to a chrome-like high gloss and the other parts are painted in anthracite, black or brown.

The spelling of the model name enables it to be distinguished from the predecessor Lancia Y. Instead of the individual letter, the name is now spelled out in this model, i.e. Ypsilon instead of Y. The internal type designation is 843. 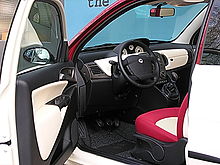 Interior of the Lancia Ypsilon

In the interior, the design of the dashboard is striking. On the top there is a shelf across the entire width of the interior, in the middle of which the instruments are arranged. Directly below the radio and the controls for the heating or air conditioning, the gearshift lever is mounted in the middle of the dashboard and is therefore higher than usual. The steering wheel is always adjustable in height and depth, and a height-adjustable driver's seat was standard.

The seats can be covered with velor , textile cover, Alcantara microfibre, leather and, since the “facelift”, instead with leather / Alcantara, often also in a “bi-color” version. There was an optional lumbar support for the driver's seat. Similar to the seat covers, the door panels are also covered with textile or leather in places. It should be unique in this vehicle class that part of the dashboard is always covered with textile or leather. Various rear seats were available for this model. On the one hand there was a three-seater rear bench seat that can be folded down as a whole, on the other hand there was a bench seat with two seats, the backrest of which can be tilted in three stages and can be fully folded down. Depending on the equipment, this two-seater bench can also be slid in length and have a two-part backrest, which can be tilted in a 50:50 ratio in three stages or folded down completely. With the latter bench version, the possibility of displacement with upright rear seat backrests results in a variable trunk between 215 l and 290 l. Lancia did not provide a value for the maximum trunk space with the rear seats fully folded. The ADAC has determined 525 l up to the lower edge of the window.

Lettering of the Ypsilon

Like its predecessors, this Ypsilon could also be equipped with above-average equipment for this vehicle class. The standard comfort equipment always included central locking with radio remote control, electric windows, on-board computer, rev counter and follow-me-home function with delayed switch-off of the headlights. Every Ypsilon also had the electric power steering "Dualdrive" with speed-dependent steering assistance as standard. With this type of steering, you can switch from normal mode to so-called city mode at the push of a button, which significantly increases steering assistance and makes driving around town and parking maneuvers easier. From a driving speed of 70 km / h, the power assistance is identical in both modes.

Depending on the equipment line, a hand-controlled air conditioning system with pollen filter and recirculation function was also part of the standard equipment, as well as 15-inch alloy wheels, CD radio with or without MP3 playback function, electrically adjustable and heated exterior mirrors, fog lights, steering wheel and gear knob in leather and cruise control Control ". Sometimes the automatic two-zone automatic air conditioning was part of the standard equipment or can be ordered at an additional cost. With this it is possible to set the temperature for the right and left interior halves separately and to achieve a maximum temperature difference of 7 degrees between the two interior halves. It is controlled via an electronic control unit and sensors for the inside and outside temperature, a sensor for solar radiation and an air quality sensor (AQS). The latter automatically switches the air circulation function on or off when the outside air is poor (for example in tunnels).

A large “Granluce” sliding glass roof was available for the Ypsilon. This sunroof takes up almost 70 percent of the headliner and consists of two glass panels (one fixed and one movable) and two sun blinds that slide independently of each other towards the rear of the vehicle. In addition, 16-inch alloy wheels were also available, as well as rear parking sensors, smoking package, ISOFIX device, rain sensor and twilight sensor.

In addition to the CD radios, a CD changer and a BOSE sound system were also available, consisting of six loudspeakers, a subwoofer mounted in the trunk and an amplifier. This is complemented by multifunction buttons on the steering wheel. The optional "Blue & Me system" is a Bluetooth hands-free intercom system with voice control and a USB port for playing MP3 and WMA audio files via the car radio. On request there was also a satellite-controlled navigation system (GPS) "Connect Nav +", which contained an RDS radio with CD player and a GSM telephone. It offers the functions WAP, emergency call button, voice control, map display on a 6.5 "TFT color display and access to telematics services.

Besides three or four regular equipment lines, there are and were a number of special models, not all of which were offered in Germany. So there was the Ypsilon as "Collezione Centenario", "Moda Milano", "Momo Design", "Platino Plus", "Limited Edition", "Blue & Me", "Unique Edition", "Ego", "E-Collection", "Eco Chic", "edizione", "Elle", "Elefantino Blu", "Elefantino Rosso", "Diva Collection", "Collection 2011" and the Ypsilon "Elefantino".

In this facelift, the front and rear aprons were redesigned by omitting the black, unpainted plastic bumper strips and changing the shape of the cooling air intake and the fog lights. Since then, the bumpers have been completely painted and a horizontal trim strip and a red reflector at each end have been embedded in the rear bumper, as these were no longer necessary when the rear lights were changed from red to completely white; the third brake light remained red. With the new bumpers, the vehicle length increased by 3.2 centimeters to 3.81 meters.

The radiator grille was changed and the higher equipment lines got chrome trim strips on the sides just above the sills. The equipment lines were renamed and restructured. The seat covers have been changed in line with the lacquer range and the seat center section of the leather seat covers is now covered with Alcantara and the Ypsilon lettering is embroidered on the headrests.

On the technical side, there were small revisions to the engine range and the introduction of the "Blue & Me-Info" telematics system. In addition, the hub caps were redesigned and two-tone light alloy wheels were introduced.

With the introduction of the Ypsilon "Sport Momo Design" in 2007, the new Lancia brand emblem was gradually introduced into the Ypsilon series.

The front axle of the Ypsilon consisted of triangular wishbones with a stabilizer and MacPherson struts . The rack and pinion steering was provided with electrical power steering. The rear wheels are suspended from a torsion beam axle with a stabilizer, coil springs and telescopic shock absorbers. The chassis is set to be more comfortable.

From August 2010, only the new 1.2 8V engine was offered in Germany, which with 69 hp (51 kW) was the most economical gasoline engine for this model. It complies with the Euro 5 standard and, with CO 2 emissions of 114 g / km, is on par with the most economical diesel engines with DFN transmissions. The petrol engines were usually combined with a 5-speed manual gearbox, only the 1.4 16V had a 6-speed manual gearbox as standard or a 5-speed DFN gearbox on request. The Ypsilon was only available in Italy under the name EcoChic with a GPL LPG system.

The Ypsilon was the first Lancia in this vehicle class to be offered with diesel engines. The 1.3 Multijet 16V with 70 hp was available immediately for the market launch. It is always the same 1.3 l turbo diesel engine with common rail direct injection, which was offered with various modifications in four different power levels. The camshaft is driven by a timing chain that is designed for a mileage of 250,000 km. During this time, the engine should not require any mechanical maintenance.

With the model revision in late summer 2006, the 70 hp engine was replaced by the 75 hp variant and a 1.3 Multijet with 90 hp was also offered. From now on, a soot particle filter was offered for engines with 75 and 90 hp. The 90 and 105 hp engines had turbochargers with adjustable turbine guide vanes . The 105 hp engine could only be ordered for the Ypsilon Sport Momo Design from spring 2007.

All diesel engines met the Euro 4 emissions standard and were only available with a 5-speed manual gearbox or with a DFN automatic (not for the 105 hp version).

From February 2010, no more diesel engines were offered in Germany.

Lancia Ypsilon petrol engines (as of 2010)

Lancia Ypsilon diesel engines (as of 2010)