The A112 is a small car that the Fiat Group launched under the Autobianchi brand on October 2, 1969 in Italy and on the German market in spring 1970. In the 17-year construction period, seven series were created, which mainly differ in the shape of the add-on parts (radiator grille, taillights, interior fittings).

With the Series IV, the vehicle began to be marketed outside Italy under the Lancia brand as the Lancia A112 at the end of 1977 . Fiat - as the parent company of both Autobianchi and Lancia - decided in 1975 to put the Autobianchi plant under the direction of Lancia, since most dealers already carried both brands and so the Lancia program could be rounded down. At the time, the A112 was the only remaining Autobianchi model.

Plastic bumpers instead of the previous chrome bumpers

No additional bar on the grill, higher front and rear bumpers, front indicators in the bumper and new taillights, number plate moved between the taillights; Versions: Junior, Elite, LX, Abarth

Cut-outs for the fog lamps in the front bumper, fog lamps only had the Abarth version. Cover between the taillights, license plate recess in the rear bumper; Versions: Junior, Elite, LX, Abarth

The displacement was increased for the more powerful Abarth models to up to 1049 cm³, the most powerful version developed 51 kW (70 hp).

The technology came from Fiat. The A112 was thus built on a modular basis and was the forerunner of the later Fiat 127 .

The self-supporting body had a tailgate, two doors and five seats.

There were four individually suspended wheels, at the front with MacPherson struts and simple wishbones and stabilizer , at the rear with a transverse two-leaf spring , trapezoidal wishbones and shock absorber struts .

The short wheelbase had the advantage of giving the vehicle agility, but on the other hand the A112 tended to oversteer suddenly - with an otherwise clear tendency to understeer - when braking in fast corners .

Before 1979 the dashboard had large round instruments. The models, with the exception of the A112 Junior, were equipped with a tachometer , the A112 Abarth also had a voltmeter , oil pressure gauge and oil thermometer on the passenger side . The oil pressure meter and the oil thermometer were placed in the completely redesigned dashboard from 1979 in the center console below the heating control. The main instruments were square in the now angular dashboard.

All engines are based on the engine block of the Fiat 600 with four cylinders, triple-bearing crankshafts, lower camshafts (driven by a timing chain), tappets, bumpers , rocker arms and hanging valves in an aluminum head. The Abarth versions have a bore of 67.2 mm. The cylinder firing order is always: 1-3-2-4.

The 903 cm 3 engine was available for the entire 17-year construction period of the A112. 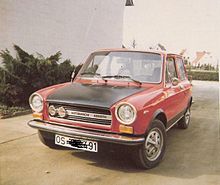 The front wheels were driven by a single-disc dry clutch and a fully synchronized four-speed gearbox. From 1978 there were fully synchronized five-speed transmissions for the XL, XEL and Abarth models. A three-speed automatic (from the Fiat 128) was only offered on the Italian market from 1972 to 1974 in the XEL equipment.

Fuel consumption in liters per 100 km according to ECE standard

The Autobianchi A112 has the following security features:

An A112 Abarth 70 HP (5th series) appears in the video game Gran Turismo 4 for the PlayStation 2 from Sony .

In the 1970s, the A112 Abarth 58 HP was used as an emergency vehicle by the Polizia Municipale in Italy.

Commons : Autobianchi A112  - collection of pictures, videos and audio files