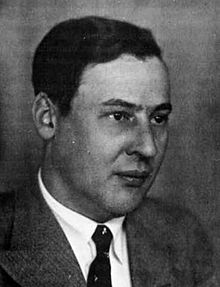 Erich Armand Arthur Joseph Hückel (born August 9, 1896 in Berlin , † February 16, 1980 in Marburg ) was a German chemist and physicist . He is considered a pioneer in quantum chemistry . 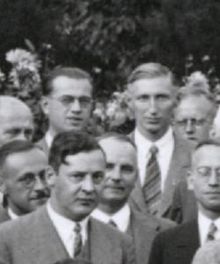 Above Rudolf Hilsch and Otto Scherzer , in front Erich Hückel, 1935 in Stuttgart

Erich Hückel was born in 1896 as the middle of the three sons of the doctor Armand Hückel (1860-1927). His father had scientific interests and, as a private scholar, had his own laboratory. His brothers were Walter Hückel (1895–1973), professor of organic chemistry , and Rudi Hückel (1899–1949), doctor. One of his great-grandfathers was the well-known botanist Carl Friedrich von Gärtner (1772–1850), one of his great-great-grandfathers of botanists and professor in St. Petersburg Joseph Gärtner (1732–1791).

Huckel went to Göttingen from 1905 to 1914 at the high school and studied from 1914 to 1921 Physics and Mathematics at the University of Göttingen , where he in 1921 Peter Debye on the "dispersion of X-rays by anisotropic fluids" doctorate , a job in the wake of the Debye and Paul Scherrer in 1916 developed the Debye-Scherrer method . The studies were interrupted by military service as a research assistant at the model research institute for aerodynamics by Ludwig Prandtl (1916) and in 1918 at the naval aircraft command in Warnemünde . After the war he went back to Göttingen and actually wanted to follow Debye to the ETH Zurich , but had to wait a while in Switzerland due to work restrictions. He was assistant to David Hilbert and assistant to Max Born in Göttingen, before he went to ETH Zurich as assistant to Debye in 1922, where he worked on Debye's current research area (theory of strong electrolytes). In 1925 he completed his habilitation at Debye ( concentrated solution of aqueous electrolytes ). In 1928 he went on a Rockefeller scholarship to University College London to join FC Donnan and then to Niels Bohr in Copenhagen , where he began working on the application of quantum mechanics to chemical bonding. He continued this from 1929 with Werner Heisenberg and Friedrich Hund at the University of Leipzig , where his work on the double bond and benzene (1931) originated, the foundations of the later so-called HMO theory (Hückel Molecular Orbital Theory, Hückel molecular orbital method ). However, this work did not find general recognition until much later and at that time brought him more disadvantages, since he moved between the fields of physics and chemistry. In 1930 he was given a teaching position in Stuttgart for physical chemistry, for which he qualified as a professor with his benzene thesis. In 1937 he became an associate professor at the University of Marburg . There he was the only theoretical physicist to hold the course lectures - in the war years also the internship for doctors - without being assigned assistant positions. The overload of work meant that he had to postpone his research for the time being. In 1947 he was given the chair for theoretical physics and he also received an assistant (temporarily the mathematician Horst Tietz ). In the meantime, the HMO theory had established itself particularly abroad. Hückel, whose health was compromised, was no longer able to follow the current research in this area. In 1961 he became a full professor and a year later he retired.

His most important scientific achievements include the quantum theoretical interpretation of the thermodynamic properties of benzene and, related to this, the formulation of the Hückel approximation named after him , from which u. a. the Hückel rule for the definition of the aromatic state follows. He also worked in the field of electrochemistry , in particular the Debye-Hückel theory arose.

In 1965 he was awarded the Otto Hahn Prize for Chemistry and Physics . In 1966 he was elected a member of the Leopoldina .

Hückel was married to Annemarie Zsigmondy, the daughter of the Nobel laureate in chemistry, Richard Zsigmondy , with whom he had four children.

The Society of German Chemists has been awarding an Erich Hückel Prize for outstanding achievements in theoretical chemistry since 2016 . The first award winner was Werner Kutzelnigg .