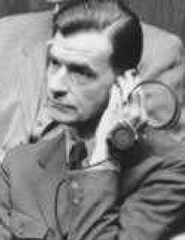 Ernst Wilhelm Bohle in the dock at the Nuremberg trial

Ernst Wilhelm Bohle was born as the son of the college teacher and engineer Hermann Bohle (1876–1943) who had emigrated to England . In 1906 he came to Cape Town , where his father had taken up a professorship for electrical engineering (see University of Cape Town ), and attended a high school there. He studied political science and business administration in Cologne and Berlin and graduated in December 1923 from the Berlin School of Management with a degree in business administration . During his studies Bohle became a member of the Berlin fraternity in Gothia in 1922 . On November 14, 1925, he married Gertrud Bachmann. From 1924 to 1930, Bohle worked as a branch manager and agent in the import-export business for various companies in the Rhineland and later founded and later temporarily managed a car accessories company in Hamburg . During the global economic crisis he became unemployed and could hardly support his family in Hamburg. In 1931 he successfully applied for a position in the NSDAP's foreign organization, which was looking for an Africa specialist.

In December 1931 he became assistant to Hans Nieland , the head of the " Foreign Organization of the NSDAP " (AO), initially responsible for South and South West Africa, later for North America. This organizational unit was founded in Hamburg on May 1, 1931, and Gregor Strasser , then head of the National Socialist Reich , appointed Nieland as its boss. Gregor Strasser's position was called into question by the poor results of the NSDAP in the November 1932 elections . This also had an impact on Nieland, who had to resign on May 8, 1933. In the meantime he became head of the Hamburg police authority and later a member of the Hamburg state government. In October 1933 the AO was assigned to the staff of the deputy of the Führer Rudolf Hess .

The AO was the only party division responsible for party members who were abroad. A party group of the NSDAP under this AO was founded in almost every country in the world. According to the Encyclopedia of National Socialism , the "main activities were the ideological training of local party members and Reich Germans as well as the fight against opposing propaganda and assimilation policy". The activities of the AO, "which also used its contacts for espionage and political pressures", often strained relations with other nations.

Ernst Wilhelm Bohle was entrusted with the management of the AO with the rank of Gauleiter . He was very respected in party circles. Joseph Goebbels described him in his diary on November 7th, 1935 as "one of our most capable people" . In March 1935 the AO was relocated to Berlin. The AO became a powerful authority. Before the war began, it allegedly had over 800 employees. After the Bohles moved to Berlin, Bohles’s father also returned from South Africa. From 1932 to 1934 Hermann had been the national group leader of the NSDAP / AO in the South African Union and from 1938 acted as president of the Berlin-based German-South African Society .

In 1937 Hitler appointed Bohle head of the AO of the NSDAP in the rank of State Secretary z. b. V. in the Foreign Office (AA). Bohle worked as State Secretary in this authority in matters of the NSDAP / AO, which he headed as a global organization with the rank of Gauleiter . When Rudolf Hess took his flight to Great Britain in 1941 , Bohle's position became difficult. Bohle had to reveal to Hitler that he had already had to translate a letter into English for Hess in the autumn of 1940, which Hess supposedly wanted to send to a politician in England, but which he had actually handed in after his flight in England. But Hitler forgave him. Joachim von Ribbentrop denounced him after May 10, 1941 and de facto forced him out of office in the AA at the end of 1941. Bohle continued to receive state secretary rank and salaries until May 1945. Bohle retained responsibility for the AO. Bohle's dismissal was kept secret from the outside so as not to generate unpleasant discussions.

Like all senior Nazi functionaries, Bohle received several awards. In his case, he received the War Merit Cross, the NSDAP's Golden Party Badge in 1937, the NSDAP's service award for 10 years of service (bronze) in 1942, the SS Ring of Honor from Himmler and a sword of honor from the Reichsführer SS . A boat of the Kriegsmarine (V 5911 (ex V 6101)) of the 59th outpost flotilla in Norway was called Gauleiter Bohle .

In the summer of 1945, Bohle was interned with other greats from the NSDAP and the Wehrmacht in Bad Mondorf, Luxembourg, in POW camp No. 32 ( Camp Ashcan ) until the camp was disbanded in August and September 1945.

On April 11, 1949, Bohle was sentenced to five years imprisonment in one of the Nuremberg follow-up trials , the so-called Wilhelmstrasse Trial , but was pardoned again on December 21, 1949 by the American High Commissioner John Jay McCloy . He then worked as a businessman in Hamburg.

In the post-war period, Ernst Wilhelm Bohle initiated the founding of an organization that was committed to developing international economic relations with the South African Union. The German-South African Society (DSAG) was re-established in 1965 through various intermediate stages, to which from the beginning of 1950 the “South African Study Societies” in Hamburg, Munich , Stuttgart and Düsseldorf belonged (the Düsseldorfer Kreis was headed by the former “Reich Press Chief” Otto Dietrich ) .

Robert Kempner dedicated a short "obituary" to Bohle on the occasion of his death. He got to know Bohle better in the Landsberg War Crimes Prison while processing appeals for clemency and described him as one of the few who had expressly regretted the crimes of Nazi Germany and asked for forgiveness.