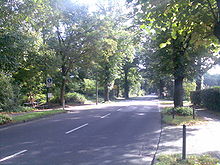 The crossing point of the former Alweg railway line with Neusser Landstraße, in October 2006

Fühlingen is a northern part of Cologne in the borough of Chorweiler . Fühlingen is known nationwide for the Fühlinger See recreational area to the south of the village .

The place is in the left bank of the Rhine north of the city of Cologne. The Rhine flows about two kilometers east of Fühlingen . To the east of Fühlingen is the Feldkassel industrial park and to the northeast is the Langel location in the Merkenich district of Cologne. The Worringen district borders to the northwest, Blumenberg , Chorweiler and Seeberg to the west .

Due to its location as a flood-proof hill west of the Rhine, Fühlingen was settled very early on. Archaeological finds of settlement traces go back to the Neolithic Age . In the area of ​​the Fühlinger See there were several brickworks in Roman times .

In the Middle Ages, the place was in the shadow of the larger, northern Worringen and consisted of only a few farms. The sovereign was the Archbishop of Cologne. The responsible parish church was St. Amandus in Rheinkassel . There was only a small chapel in Fühlingen. The cemetery was also in Rheinkassel.

In the 19th century, the Oppenheim banking family built a stud farm with its own racecourse for training purposes a few hundred meters south of the village . With the proceeds from the sale of the property, the people of Fühlingen were able to build their own church, St. Marien, in 1887. A small school building was built on the opposite side of the street as early as 1844. The own church also allowed the establishment of its own cemetery, about 100 meters east of the church. The future Archbishop of Cologne , Joseph Frings, worked for several years as the parish rector in St. Marien .

In 1922 the mayor's office in Worringen was incorporated into Cologne. The Second World War left the site almost unscathed despite its proximity to the chemical plants in Leverkusen and Dormagen and the flak batteries stationed in the vicinity of Fühlingen.

Since July 15, 1954, the localities of Kasselberg, Langel, Feldkassel and Rheinkassel belonged to the district of Fühlingen, as they were too small in the opinion of the Organizational Office of the City of Cologne. They have been part of Cologne-Merkenich since October 7, 1963 . In the mid-1950s, a test track for the Alwegbahn , a monorail , was built near Fühlingen . The test track was demolished again from 1967. Towards the mid-1960s, the city of Cologne planned to demolish the whole place in order to build a green separation corridor between the planned industrial line along the Rhine and the residential development of the "New City" Chorweiler. After violent protests by local residents, the plan was dropped again in 1973.

Structure of the population of Cologne-Fühlingen: 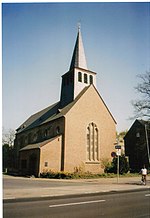 The place still has village-like structures, although a larger new building area was built on the western edge and numerous one and two-family houses were built within the place. Due to the settlement structure, the manageable size and the location in the middle of fields and on the Fühlinger See, the place is a popular residential area.

Federal highway 9 ran through the town until June 2016 . Then, after more than thirty years of planning and construction, a bypass road was completed. This also serves as a feeder to Federal Motorway 1 . Bus line 120 runs through Fühlingen: Blumenberg - Chorweiler - Fühlingen - Worringen - Roggendorf / Thenhoven.

The primary school existed as a former elementary school since around 1880. It had been expanded in 1905 and in the 1930s. At the end of the 1970s it was closed due to insufficient student numbers. Since then, the primary school responsible for Fühlingen has been located in Seeberg , about three kilometers away.

Fühlingen is too small for a primary school, but the number of children is sufficient for a kindergarten .

Cologne districts in the Chorweiler district