The construction of St. Agnes goes back to the foundation of Peter Joseph Roeckerath (1837–1905) in 1895. His wife Agnes, with whom he was married since 1876, came from a Cologne farming family; she brought large areas of agricultural land close to the city with her into the marriage. In the course of the city expansion from 1880, the family made considerable wealth through the sale of the land.

The church should as a grave church serve for his late wife in 1890 and as a patron saint , the Holy Agnes received in whose name his wife was baptized. Originally Roeckerath wanted to have the church built on Herwarthstrasse. This location was then rejected as was another building site on the Vorgebirgstrasse. Finally, following a proposal by the Vicariate General of the Archdiocese, the choice fell on the location at the old fork in the road between Neusser Strasse and Niehler Strasse. Like other churches in Cologne's Neustadt district, St. Agnes is not traditionally oriented towards the east, but rather towards the then still young Ringstrasse.

In 1896 the construction of the neo-Gothic church started according to plans by the architects Carl Rüdell and Richard Odenthal . They designed the church in the neo-Gothic style , which was very popular in Cologne after the completion of the cathedral. The Elisabeth Church in Marburg was the model for the floor plan . The building was built using brick and faced with light sandstone and tuff stone. Pillars, arches, the portals and the tracery of the windows were highlighted with red sandstone. It is striking that the conception of the tower in particular does not make use of the Gothic canon of forms , but is an independent, Gothic-perceived creation of historicism . The church was completed in 1901 and initially only consecrated on January 21, 1902. The church was solemnly consecrated by the Archbishop of Cologne only when the addition of a sacristy , decided in 1910, was completed in 1913 . In 1924 the crypt , which had been converted into a war memorial chapel, was finished. Roeckerath, who died in 1905, is buried in one of the side chapels. In 1920 the parish of St. Agnes was the largest parish in Cologne with 27,000 parish members.

The place on which the church stands is called Neusser Platz; Since 2018 the part of the square in front of the entrance to the church has been called "Roeckerath-Platz". St. Agnes is 80 m long, 40 m wide and has an area of ​​approx. 2,155 m². The tower has a height of 61 m.

During the Second World War , St. Agnes suffered considerable damage. In 1943, a bomb explosion in front of the church caused the first damage, later the roof went up in flames and in September 1943 the vault of the nave collapsed as a result of the bombing. After the end of the war, parts of the choir vault collapsed in May 1945 and destroyed the preserved high altar.

In July 1945, the first emergency church in Cologne was inaugurated in the east transept. In January 1950 the flat concrete roof on steel girders was completed and in October 1950 the entire church interior was inaugurated.

In 1958 the church was provided with a roof again and in 1967 work on the church facade was finally finished. On June 18, 1980, as a result of improperly executed welding work, there was a major fire in the church roof, which was destroyed in the process. After a long and controversial discussion, the flat, clad ceiling typical of the reconstruction period was finally replaced by a reconstruction of the original vault. Karl-Josef Ernst from Zülpich was commissioned with the design and the architectural supervision . 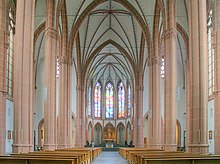 The interior of the church is simply painted in a historical style. The windows in the choir designed by Wilhelm Buschulte are worth seeing (Buschulte created around five hundred church window cycles in the second half of the 20th century). Anatol Herzfeld , a master student of Joseph Beuys , redesigned the crypt in 1994 to commemorate the martyrs of the KAB ( Nikolaus Groß , Bernhard Letterhaus and Prelate Otto Müller ). The baptismal font and the neo-Gothic high altar date from the time the church was built; the community altar from 1987 was designed by Elmar Hillebrand . The areas in the arches of the western end wall were designed by Clemens Hillebrand .

The organ was built in 1989 by the organ building company Rieger from Austria. It has 50 stops on 3 manuals and a pedal . The large French swell gives the instrument its special symphonic character.