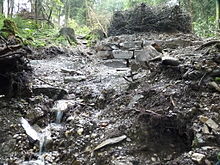 Ferndorfquelle in 2014 shortly after the renaturation; The spring nest can be seen in the background , directly below it is the main spring ( status 2014-2018 )

The Ferndorfquelle in 2018 - after another redesign

The Ferndorfquelle is located in Westphalia in the (historical) Siegerland in the southern part of the Rothaargebirge . It is located in the Sauerland-Rothaargebirge nature park 0.85 km southeast of Oberndorf, 1.6 km east of Helberhausen and 2.4 km (as the crow flies ) northeast of Vormwald at an altitude of about 602  m above sea level. NHN on the north slope of the 649.9  m high Buchenhain elevation; to the northeast is the Wollberg ( 649  m ). Near the source is the Helberhauser Schlag cultural monument (approx.  610  m ) and a little to the east of it the Ferndorfquelle barbecue area (approx.  621  m ).

The Ferndorfquelle belongs to the natural spatial main unit group Süderbergland (No. 33), in the main unit Rothaargebirge (with Hochsauerland ) (333) and in the subunit Westrothaarhöhen (333.4) to the natural area Westliche (Rüsper) Rothaar (333.41).

Until spring 2014, the Ferndorf spring was surrounded by a wall made of river pebbles and a stone platform in front of it. It is a source of interference.

Originally the Ferndorf spring was supposed to be renatured by around Easter 2014; however, work did not begin until May 7, 2014. The wall that enclosed the spring was torn down, as were the stone slabs, the seating and the stairs. The site was remodeled so that the Ferndorfbach can flow freely down the slope from the existing seepage springs. Thus, since the renaturation, the source offers a completely different picture compared to the version that was once taken.

Since the nest was in a desolate condition in the summer of 2017, a new solution was sought that would make the source more tangible (and more stable). Right on time for the village anniversary of Helberhausen , the work on the source was completed in spring 2018. The Ferndorfbach rises below a quarry stone wall and the source outlet is accessible via a stone staircase.

Landesstraße  713 ( Ferndorfstraße ; Oberndorf - Heinsberg ) runs about 240 m northwest of the Ferndorf spring and spans the Ferndorfbach at a height of 512.6  m . About 750 meters by road to the northeast, next to a 597.8  m high forest path, is the Oberndorfer Höhe hikers' car park , from where about 750 m to the source are to be covered on the Landhecke / Hochwaldstraße forest path . The Rothaarsteig runs a few meters above this forest path, from which a wood chip path leads a few meters downhill to the so-called source nest .

A viewing nest , a small platform for a view of the source area, was created above the renatured spring . The information sign, which was on the old platform near the source, has now been repositioned on the paved connecting path between Oberndorfer Höhe and Burgseifen. Similar to the nearby Siegquelle , the spring snail ( Bythinella ), the mascot of the QuellenReich project in the Rothaargebirge, is supposed to explain information about the Ferndorfquelle on child-friendly signs.

Sources along the Rothaarsteig