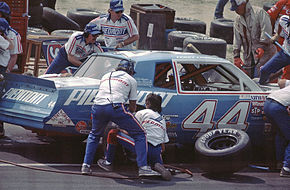 Billy Hagan in the background with his cap, glasses and headphones during a Labonte pit stop in the 1984 championship season

Driver in the NASCAR

Billy Hagan was born in a small town in the southern United States during the Great Depression . The small town in Union Parish in Louisiana had less than 100 inhabitants at the time of its birth. He grew up in a much larger city, in Lafayette , the administrative seat of Lafayette Parish . In 1961, Hagan founded Stratagraph , a company specializing in the provision of measurement technology for the oil production industry. For many years Stratagraph also served as a sponsor of its own racing activities, which meant that the small medium-sized company became known throughout North America. Today the business is run by Randy Hale and Hagan's son William.

The NASCAR -Career Hagan in Sprint Cup , then Grand National Series, started in 1969, when he succeeded his Mercury for the Talladega 500 to qualify. He contested his first race in the highest NASCAR division on a super speedway . The 29th place in the qualification was followed by the eighth place in the race. It was not until six years later that he was again at the start as a driver in a NASCAR race, again in Talladega. This time he was nineteenth. He made his third and final Sprint Cup appearance in 1979 at the Texas World Speedway . He finished the Texas 400 in seventeenth in the final classification.

Hagan was far more active in sports car racing than in NASCAR. In the 1960s he competed in the US SCCA sports car championship and in 1968 contested both his first 24-hour race at Daytona and his first 12-hour race at Sebring . In the 1970s and 1980s, he moved his racing activities to the IMSA-GT and IMSA-GTP series . His best results were third in the 1983 Mid-Ohio 6-hour race and the 1984 Lime Rock race.

As a driver, he was also one of the participants in the Le Mans 24-hour race twice . In 1981 he dropped out and in 1982 he finished the event in seventeenth overall.

In 1975 Hagan began building his own NASCAR team. The first pilot of the racing team was Skip Manning , who was able to show a third place and eight top ten placements in 28 racing starts in 1976 . At the end of the year he became the best young driver and won the NASCAR Rookie of the Year Award . After this successful start there were no further good results and after 15 changeable appearances in 1978 Hagan Manning replaced the Spark Plug 400 with Mel Larson . Larsen only drove this one race, however, then the only 22-year-old Terry Labonte joined the team, who in 1980 won the first Sprint Cup for the team at the Southern 500 at Darlington Raceway .

Labonte stayed with the team until the end of the 1986 season. This phase was the most successful in the team's history. The highlight was winning the championship in 1984 with victories at Riverside International Raceway and Bristol Motor Speedway .

Labonte was followed by Sterling Marlin , but the team was unable to match the great success of 1984 despite some strong races. It mainly had financial problems. The difficulties were triggered by the sponsorship contracts that were now concluded at short notice. Hagan's own business was soon pushed to the limit and other sources of finance were becoming increasingly difficult to find. 1994 was Hagan Rating's last regular season, the last notable pilots were John Andretti and Randy McDonald . In 1996 Hagan sold the team to Triad Motorsports and was a co-owner there until 1999. When Triad ceased operations in 1999, he retired from racing.

When the Automobile Club de l'Ouest opened the Le Mans 24-hour race for the large-displacement NASCAR and IMSA GT cars in the early 1980s, the Hagan team also took part in this 24-hour race with a Chevrolet Camaro - Races reported. In 1981 Cale Yarborough , Bill Cooper and Hagan drove a 6.5-liter V8 Chevrolet Camaro. After an accident at Yarborough due to a brake failure, the other two drivers could not drive in the race. In 1982 the team came to western France with two vehicles. While Dick Brooks and Hershel McGriff were not classified due to insufficient distance, Hagan finished the race together with Gene Felton and Tom Williams in seventeenth overall.

Billy Hagan died in November 2007 at the age of 75, the same day Terry Labonte celebrated his 51st birthday.