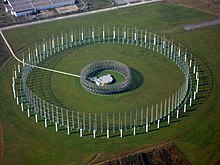 Detail of the DF antenna

The airfield Gersthofen - Gablingen was a German military airfield near Augsburg. A widely visible Wullenwever antenna ( BND branch in Gablingen ) is installed on its premises , which was used by the US armed forces for telecommunications and electronic reconnaissance until the site was handed over to the German Armed Forces .

From 1914 to 1918 it was used as the Gersthofen airfield as a subdivision of the Schleissheim Aviation School by the Royal Bavarian Aviation Troops. During the First World War, the Aviation School V of the Royal Bavarian Air Force was in Gersthofen . Halls, tank systems, a shooting range, barracks and barracks were built. There, among others, the well-known painter Paul Klee did part of his military service.

For the simple and quick construction of aircraft yards, the Bavarian air force developed a sample design that provided for an iron skeleton construction. According to this specification, a shipyard was built at Gersthofen airfield in 1917 , which was demolished in 1980 together with the entire barracks for reasons of military security. Since the spring of 1918, the airfield has been called the Gablingen-Gersthofen airport (or flying school) .

After the First World War , the site was largely dismantled. From 1934 the airport was used again for military purposes and served as a transshipment point for equipment, ammunition and food.

After the Nazis came to power, the airfield was reactivated for the Luftwaffe in the mid-1930s . In World War II the airfield was not discovered until very late by the Allied reconnaissance, as he very well camouflaged was (among others were cows from paper mache positioned and camouflaged the airfield as a lake). The A5 pilot school , the night fighter school 1 and the C7 pilot school were stationed at the airfield . The Messerschmitt Me 163 Komet was also tested here. Among other things, there were Me 262 aircraft at the Messerschmitt airfield and the Messerschmitt Bf 109 C-1 of the 2nd / JGr. 176 stationed. At the end of 1943, parts of the Messerschmitt Me 264 , so-called 'America bombers', were brought to Gersthofen to make room for the Messerschmitt Me 410 in Augsburg . In the area of barracks also were tunnels installed; these served for supply lines and also connected all barracks buildings underground. However, according to statements from former American soldiers who were stationed in Gablingen after the end of World War II, there were also massive tunnels that led down several floors.

Further side tunnels have been set up there; however, these have now collapsed or flooded with water. Apparently there is still equipment from the Second World War in the tunnels. There are also said to be very long tunnels into the adjacent community of Gablingen . In the area of ​​the Adalbert-Stifter -iedlung at the level of today's playground there is a filled-in tunnel access on the eastern slope, but whether this is connected to the Gablingen airfield has not yet been clarified. It should be noted, however, that the production of rocket fuel began in 1944 at the chemical plant of the IG Farben subsidiary Transehe, some 800 meters away .

The possible tunnel access mentioned above on the edge of the Adalbert-Stifter-Siedlung, which did not exist at the time, is only a few hundred meters away from the factory premises. Since the entire airfield is a restricted area to this day , research into the facilities could not be carried out. According to American statements, it is assumed that the tunnel systems were used for various tests.

On March 16, 1944, the airfield was attacked by two Combat Wings (approx. 100-120 aircraft of the American bomber B-17 and B-24 ), which had started in the morning from the British airfields Beachy Head and Dungeness near Dover . On April 24, 1944, 120 bombers of the type B 24 ( Liberator ) attacked the airfield during a major attack on southern Germany . In the attacks, residents of the neighboring community of Stettenhofen were also killed.

The following table shows the complete list of all active flying units (excluding school and supplementary units) of the Wehrmacht Air Force that were stationed here between 1937 and 1945.

From the beginning of 1944, a satellite camp of the Dachau concentration camp was set up in the area of ​​the airfield . About 1000 prisoners and forced laborers were in the camp who had to do work around the airfield.

Use by the United States Army

In 1956, training facilities for parachutists were built in the Gablingen barracks for the 11th US Airborne Division . The diving school was used until this division was dissolved in 1957. Then the 188th Airborne Infantry Regiment , later the 187th Airborne Infantry Regiment, was stationed on the airfield . During the presence of the 7th MEDCOM (Medical Detachment Helo Ambulances), the 236th Med Det (Hel Amb) were stationed at 6 UH-1 H airfield . During the Vietnam War (between 1966 and 1967) the airfield was also used as a training airfield for helicopter pilots . Military flight operations on the part of the site, which was previously known as the Augsburg Army Heliport (Augsburg AHP), was discontinued in 1992.

The barracks became Field Station Augsburg and in 1971 a listening system was installed on the airfield . The Signals Intelligence system (a Wullenweber circular antenna system ) was around 365 meters in diameter and had antenna grids up to 40 meters high. With the help of this elephant cage, radio traffic on shortwave with a range of several thousand kilometers could be intercepted and also located during the Cold War . The interception results are said to have been evaluated by the gigantic computer systems of the 66th intelligence service group on twelve floors underground ; what exactly took place there and whether it really is 12 floors is top secret to this day. In 1985, 1,814 INSCOM employees were stationed; these worked under the technical supervision of the NSA .

The plant was abandoned by the USA in 1998 and handed over to the German Armed Forces .

Today the monitoring systems officially belong to the FmSt Süd of the Bundeswehr, they are allegedly no longer in operation. In addition to the Bad Aibling facility, the BND also lists Gablingen as one of the locations that will not move to Berlin.

By handing it over to the Bundeswehr, a solution for converting Bundesstraße 2 could finally be implemented. For years, the Americans refused to move the outer fence 15 meters inwards, which would have been necessary in order to expand the adjoining main road to four lanes.