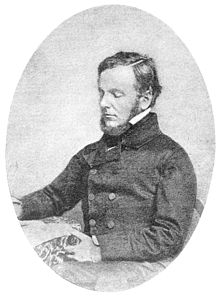 Francis Wharton (born March  7, 1820 in Philadelphia , †  February 21, 1889 in Washington, DC ) was an American lawyer , pastor and author , who was considered one of the leading American legal scholars of his time. He worked as a professor at various universities and published a three-volume compendium on international law under the title Digest of International Law in 1886 on behalf of the American State Department , along with numerous other legal works . With a paper published in 1855, he was also the first American lawyer to devote himself extensively to the incapacity of mentally ill offenders. The Wharton's rule is named after him , a principle in the legal practice of a number of American states for the inadmissibility of the prosecution of certain crimes as a conspiracy .

Francis Wharton was born in Philadelphia in 1820 to wealthy parents and graduated from Yale University in 1839 . He received four years later, his admission as a lawyer and served in 1845, the Assistant Attorney General of the State of Pennsylvania . He was also the editor of the North American and United States Gazette in his hometown . From 1856 to 1863 he was Professor of English History and Literature and Constitutional Law at Kenyon College , Gambier , Knox County, Ohio . He then took on a position as Episcopal pastor in St. Paul's Church in Brookline, Massachusetts from 1863 to 1869 .

From 1871 to 1881 he taught church and canon law at the Protestant Episcopal Theological School in Cambridge, Massachusetts, and private international law at Boston University . In 1874 he was elected to the American Academy of Arts and Sciences . In the following years he undertook a two-year trip to Europe and, after initially returning to Philadelphia, settled in Washington, DC . Here he taught criminal law at Columbian University from 1885 to 1888 , including as a professor from 1886. From 1885 to 1888 he also worked for the State Department of the United States , on whose behalf he published a three-volume compendium on international law under the title Digest of International Law .

Francis Wharton was married first from 1852 and, after his wife died two years later, second from 1860, and father of two daughters. He died in Washington in 1889.

His numerous publications, which often appeared in several editions and in some cases were continued and reprinted or reprinted by other authors several decades after his death, included treatises on medical law, criminal law and criminal procedure law , evidence in criminal and civil proceedings , on contract law as well as international law and private international law. He has also written books and articles on legal history and legal philosophy , on religious topics and on canon law .

He was the first American lawyer who dealt extensively in his literature with the question of the incapacity of mentally ill offenders. Named after him is a legal principle known as Wharton's rule , which has found its way into legal practice in a number of states in the USA. According to this rule, criminal acts such as bigamy or incest , which by their nature require the participation of two perpetrators, cannot be prosecuted as a conspiracy if only two people are involved in the execution.