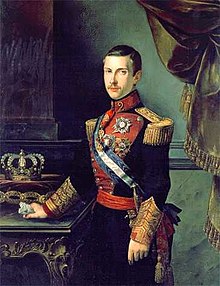 Francis of Assisi Maria Ferdinand of Bourbon and Naples-Sicily (span. Francisco de Asís María Fernando de Borbón y Borbón ) (born May 13, 1822 in the Royal Palace of Aranjuez , † April 17, 1902 in Épinay-sur-Seine ) was as Husband of Isabella II Titular King of Spain .

He was the son of the Duke of Cadiz, Francisco de Paula de Borbón , and Luisa Carlota di Bourbon , daughter of Francesco I di Borbone , King of Naples-Sicily and Maria Isabel de Bourbón , Infanta of Spain.

As the cousin of Queen Isabella II, who was only sixteen years old but who had already been declared of age, he received the title of king on October 10, 1846, the day of the marriage . The wedding was arranged by her mother, Ferdinand VII's widow , Maria Christina (1806–1878).

On the same day, the Duke of Montpensier , son of the French King Louis-Philippe , married Isabella's younger sister Luisa Fernanda in a double wedding . 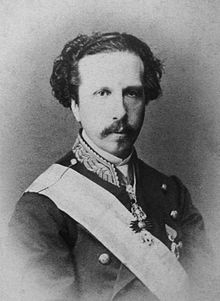 Since Franz was considered ailing, no children were expected when arranging the marriage from his marriage to Isabella because of his apparently incapable of childbearing. In this way, the crown would have fallen to Luisa Fernanda and her descendants with the Duke of Montpensier and thus to the French royal family in the long term. England had previously protested against Isabella's direct marriage to the French prince. Contrary to the expectations associated with marriage, Isabella and Franz had a total of 9 children, of which only five survived childhood. During his lifetime rumors circulated repeatedly that Franz was homosexual and not the father of all of his children. However, these have not yet been conclusively proven.

From 1864 Franz acted as chairman of the Spanish Imperial Council. After the so-called September Revolution in 1868, he followed the Queen into exile in France. There they parted forever by contract. Franz assumed the incognito title of Count of Mortalla. After his death he was buried in the Pantheon of Kings of the El Escorial Monastery.