Günter Schumann (* 1941 in Neuwernsdorf ) is a German sculptor . His material has been wood since 1967 , which he processes with a chainsaw , among other things . 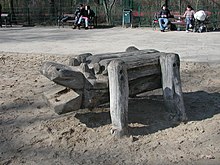 Schumann grew up in the GDR . There he trained as a wood sculptor , after which he worked as a craftsman and produced many animal sculptures . He achieved his artistic breakthrough through a report in the culture magazine “ Das Magazin ” about him. In the early 1970s he was commissioned by the Leipzig Artists' Association to produce a football team out of wood. The client did not like the figures, he had to rework them. After that, Schumann no longer accepted any commissioned work.

For the 8th art exhibition in Dresden in 1977/78 he made a wooden Trabi , which the organizers did not like, so it was unloaded again. His reaction to this was that he had the “wooden Trabi” brought to Dresden and “exhibited” it in the city center. The car was towed away by the authorities after a few days and placed on his doorstep.

"Crocodile" on the children's playground

At the end of the 1970s, Schumann produced his third work, a wooden one-hundred-mark note with a picture of Karl Marx , with which he wanted to draw attention to the contradiction between the meaning of money and Marx's theory; again he offended with it. For a children's playground in Berlin's Lichtenberg city park , he made five animal figures that were placed there in 1980 and three of which are still preserved. In the Federal Republic people became aware of his animal sculptures, he was invited to the West several times, but was not allowed to leave. Now he withdrew from wood carving for the time being. From 1989 he made sculptures again, mostly animals.

Schumann has lived in Woserin in Mecklenburg-Western Pomerania since 1996 . After reunification , he began making “critical” sculptures that deal with current issues. The first work was Der Bahnhof Bad Kleinen , with which he processed the death of the RAF terrorist Wolfgang Grams during a GSG-9 mission in Bad Kleinen . With Stralsund. He discussed the transfer of the death of a homeless man who was abandoned by Stralsund police outside the city and froze to death .

In 2005 he came into conflict with the judiciary with a wooden sculpture with the provocative title Assfucker . The sculpture shows two police officers having anal sex , which is supposed to be based on a real incident in the Bautzen Police School . The work, which he set up on a trailer in front of the Schwerin District Court for an “audience test”, was confiscated by the Schwerin police. Then Schumann made the sculpture a second time. This was followed by a complaint for insulting and the dissemination of pornographic writings, he should now even be examined for his state of mind, but an appointed medical officer had to leave his court without having achieved anything . No public information is known about the progress of the threatened trial of libel in autumn 2005 . With the production of Hundred Hitler for Mecklenburg , Schumann processed the subject of right-wing radicalism .