The battle at Gohfeld on August 1, 1759 was an accompaniment to the Battle of Minden , a major battle of the Seven Years' War . Troops of the British-Prussian alliance under the Hereditary Prince of Braunschweig defeated a French corps under the Duke of Brissac near Gohfeld and Mennighüffen (today part of Löhne in northeastern North Rhine-Westphalia ) and thus prevented an orderly retreat of the main French power, which had been defeated at Minden. About 14,000 soldiers were involved in the fight.

At the beginning of July 1759, a French force under Marshals Broglie and Contades occupied the Prussian fortress of Minden . To the west of the city, under the leadership of Ferdinand von Braunschweig, was the Allied Army, consisting primarily of British , Hanoverian and Prussian troops. Both sides prepared for a decisive battle in late July.

The main supply line and the cheapest possible route of retreat for the French was the old connecting road from the Rhine via Bielefeld and Herford and through the Porta Westfalica (Westphalian Gate) . The French high command realized that, in view of the upcoming battle at Minden, one of the Allies' objectives would be to interrupt this rearward connection, so it deployed a larger security force to the southwest on July 28th. It finally comprised 2,000 infantry and cavalry each as well as five guns and was under the command of the 60-year-old Duke Jean-Paul-Timoléon von Brissac . In fact, Ferdinand von Braunschweig transferred strong forces, v. a. Hanoverians, also Brunswick , Prussia and Hesse , across the Wiehen Mountains to the south. The 23-year-old commander, Hereditary Prince Karl Wilhelm Ferdinand of Braunschweig, had 8,000 infantry, 2,000 cavalry and 32 guns at his disposal.

The French initially occupied a strong advanced defensive position on the bridges over the Else in the Bünde area northwest of Herford and were able to repel a first attack by the allies here on July 30th. However, the Duke of Brissac now received orders to retreat to the east in order to immediately protect the supplies via the connecting road. He therefore had the strategically important Gohfelder Werrebrücke , halfway between Herford and Westfälischer Pforte , over which the road ran, occupied and also had a defensive position near the church village to the south. Having been informed of this, the Hereditary Prince, who had advanced with his troops and was now camped at Quernheim Abbey northeast of Bünde , prepared his plan of attack.

The Hereditary Prince's plan of attack

The Hereditary Prince's goal was to encircle and smash the French. For this purpose he divided his troops into three roughly equal groups. The middle group under Lieutenant General von Kielmannsegge was supposed to march north of the Werre onto the bridge and take the enemy positions under fire with most of the artillery. The group on the right, led by the Hereditary Prince himself, was to cross the Else at Kirchlengern, then the Werre at the village of Löhne , advance south of the river to Gohfeld and finally fall into the left flank of the enemy. The third, left-hand group under Major General von Bock was supposed to move further north to the bridge at Neusalzwerk (today Bad Oeynhausen ) to the east of Gohfeld in order to prevent the French from retreating to the east.

Representation of the action at Coofeldt

At 3 a.m. on August 1, the allies' units broke up. Only a little later, however, the Duke of Brissac transferred his main power over the bridge to the north bank of the Werre, as the terrain here was flatter and more open and offered his strong cavalry better fighting conditions. The French took up a position between Werre and the Börstel settlement, west of today's Gohfeld house in the Mennighüffen- Ostscheid district. So it happened that the middle attack group of the allies had contact with the enemy earlier and elsewhere than planned and initially without further support. While artillery and infantry took up position at the mouth of the Mühlenbach in the Werre, the cavalry carried out a first attack, but was repulsed by those of the French. This was followed by an artillery duel lasting over two hours.

Despite his inferiority in guns, the Duke was willing to hold his position as long as possible so that the Hereditary Prince's troops could not advance on Minden and decide the battle there. After noticing that the enemy forces were spread over a wide area, at around 7 a.m. he ordered his cavalry to form for an attack on the center of the allies, which he now considered to be rather weak. In fact, the attack, carried out under heavy fire, broke through the first enemy line. However, the preparations for the attack did not go unnoticed, hastily brought in infantry reserves inflicted heavy losses on the French riders and threw them back again.

In the meantime the right-wing attack group with the Hereditary Prince had also appeared south of the Gohfelder Brücke, threatened to take them and stab the French in the back. This made the duke's position untenable, so he ordered the retreat. This turned into a disorderly escape through the intervention of the northern group under Major General von Bock. The planned dismantling of the French corps was ultimately largely a success.

The number of casualties is not known, but the French, of whom around 300 were captured, are to be assessed as high. The remnants of those who had escaped fled partly via Bergkirchen , partly via Rehme , in order to join the main French power near Minden. 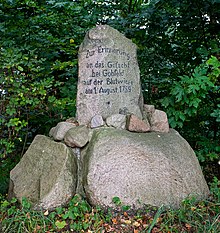 Memorial stone in memory of the battle near Gohfeld

On the same day the French armed forces were defeated near Minden. The events near Gohfeld prevented them from retreating to the southwest, where they could possibly have regrouped more quickly. They moved back to Kassel , were no longer active for the rest of the year and were never to advance that far to the northeast in the following war years.

The young Hereditary Prince Karl Wilhelm Ferdinand of Braunschweig had been able to prove himself as a capable military leader, he later made it up to the Prussian field marshal and commander in chief . The Duke Jean-Paul-Timoléon of Brissac was not harmed by his defeat against a numerically superior enemy, he was to receive the title of Marshal of France . The same was true for the later Minister of War Philippe-Henri de Ségur , who had led the French infantry at Gohfeld.

On the battlefield near Gohfeld and Mennighüffen-Ostscheid, skeletal remains and combat equipment such as cannonballs, field kettles and weapons were found around 1900. Part of the area is still called the “ blood meadow ” today . A memorial stone on Börstelstrasse reminds of what happened.