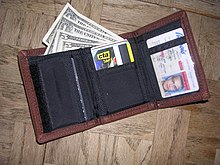 Wallet as a type of purse 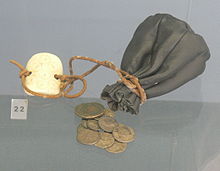 Model of a Roman purse

Egyptian hieroglyphs depict pocket-like purses carried around the waist. A leather wallet decorated with dog teeth was found in a grave near Leipzig and is dated from 2500 to 2200 BC. Dated.

Ornate metal cases, dated 600 AD, that originally covered leather purses, were found in the tombs of royal Anglo-Saxons . Finally, the urban trading centers of the Roman Empire used various coin units as a means of payment. Supraregional trade ensured its spread beyond Rome: The science of numismatics continuously evaluates historical coin finds such as small change made of copper alloys or silver, e.g. B. from the Roman port of Gelduba . Such late Roman coins are coins of retail and street trade - unlike the more valuable gold coins, they were carried in the purse.

The alms bag was a small, visibly worn purse for the alms (French Aumonière , from aumône  - alms), while the valuable coins were kept somewhere else and hidden. In contrast to the mostly low value of the contents, these were usually lavishly decorated, small bags made of precious materials, which were an important clothing accessory in Central Europe at the latest from the High Gothic period and at the same time were used for representation.

Wallets are mostly made of leather or plastic . Today there are different forms according to the different requirements. The most common are the following:

The craft profession is the fine bag maker .

In colloquial language, money sack is a derogatory term for a usually very wealthy person .

In the student language of the 19th century, the expression Münzkabinett was used as a synonym for a purse.

The purse is the most popular stolen item among pickpockets today (a bag cutter is a pickpocket who specializes in removing purses). Carrying a wallet in the back pocket of trousers, which is particularly common among men, makes thieves' work much easier. To prevent theft , some men's wallets can be attached to trousers or belts with a metal chain, which is particularly recommended for large items that protrude a little out of the trouser pocket. It is safer to carry the wallet in a front pocket, which often fails because of insufficient space or optical concerns (clear visibility of the wallet from the front). In particularly dangerous regions, the wallet can be worn under clothing (e.g. breast pocket).

As a result of the changeover to the euro , many Austrians had to get new wallets because the euro bills are larger than the earlier schilling bills . The coin compartments of some purses were also unsuitable for the euro due to insufficient strength: The very small coins (values ​​up to 10 cents) often fell out of the closed compartment, while the larger coins (from 50 cents) were damaged due to their heavy weight the purse led.