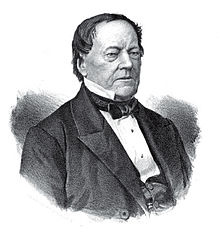 Scheutz had German ancestors and was the son of Fredrik Christian Schieutz (Scheutz) and his wife Johann Christina Berg.

Scheutz grew up in his parents' inn in Jönköping , Sweden. His formal education began in the elementary school in Jönköping and the grammar school in Växjö . In 1803 he enrolled at the University of Lund and graduated in 1805 with the preliminary legal examination for the 'Bergexamen'. Although he enrolled briefly at Uppsala University , he never took the miner exam.

With the more liberal press laws of 1809, Scheutz began his career as a publicist. His first work was to translate the report by the German geographer and biologist Eberhard August Wilhelm von Zimmermann into Swedish. In 1816 he translated Julius Caesar by William Shakespeare .

With the writer Fredrik Cederborgh (1784–1835), he founded the Cederborgska boktryckeriet in 1813 , which from 1816 onwards published the weekly opposition newspaper “Markaren” . Between 1817 and 1818 he translated works by Friedrich de la Motte Fouqué , Zacharias Werner , August von Kotzebue and Giovanni Boccaccio into Swedish. From 1819 Scheutz took over the printing company, sold the Anmärkaren and brought out the Anmärkarne , later the Argus . After his initial political orientation, he turned increasingly to literature and technology. He tried to create a wider public through his publications for science and technology. In his Journal för Manufakturer och Hushållning there are translated summaries of the articles of the most important journals from England, Germany and France. 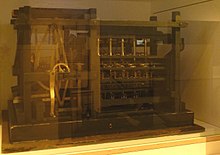 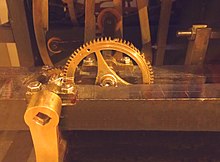 Scheutz prototype from 1843, drive crank (part) in the left foreground, in the middle of the picture, the defective, unrestored gear wheel (see text).
Machine in the Tekniska museet , Stockholm.

Scheutz difference machine No. 2. (1859)
machine in the Science Museum , London.

In the course of his publishing activities, Scheutz came into contact in 1830 with Charles Babbage's explanations about his difference machine . He was fascinated by the idea of ​​building a machine that could calculate and record the result immediately on printing plates. With the help of a detailed functional description in an overview article by Dionysius Lardner in the Edinburgh Review , Georg Scheutz constructed a model made of wood, wire and cardboard in order to convince himself of the functionality of the principle. In the summer of 1837 he allowed his 16-year-old son, the future engineer Edvard Scheutz (1821–1881), to build a larger model out of metal. Georg Scheutz was so enthusiastic about the possibilities of this model that he presented it to the Royal Swedish Academy of Sciences and asked for financial support for the production of a complete difference machine. The support was not granted.

The whereabouts of the model from 1843

The model from 1843 was sold to the Nordiska Museet , Stockholm for 50 crowns after the death of Edvard Scheutz . The model was rediscovered in the museum's fundus in December 1979 by Michael Lindgren as part of his research for his dissertation and restored as much as possible together with Per Westberg, the museum's furniture restorer. Since the main drive gear already had numerous broken teeth before it was rediscovered and this gear as a central part of the machine should not be replaced as part of the restoration, the machine is currently in a non-functional condition. The model is exhibited in the Tekniska museet , Stockholm.

In the fall of 1854 the Scheutzers started on a promotional trip to England for the difference machine. A patent (No. 2216 from 1854) was granted to them on April 13, 1955. The machine was u. a. exhibited and demonstrated in Somerset House of the Royal Society . The machine was then shown at the Paris World's Fair in 1855 . Charles Babbage showed interest in the 'Scheutzers' machine' and supported it in both London and Paris in their sales efforts, but not without highlighting his contribution. He tried in vain to convince the Royal Society (London) to appoint Georg Scheutz as a member.

In 1856, Benjamin A. Gould arranged for the Dudley Observatory in Schenectady , NY to purchase the Difference Machine for £ 1000. The machine was delivered in April 1857 and operated for two months the following winter. After these two months, Gould was released from his duties and the machine was no longer used. The Scheutz No. 1 was therefore never used according to its actual purpose, the direct creation of print templates for tables. In 1963 the difference machine was transferred to the Smithsonian Institution .

Further developments of the difference machine

A second difference machine (Scheutz No. 2), practically a copy of the first machine, was built by Edvard Scheutzer on behalf of the British Treasury together with Bryan Donkin in London, England. The machine was handed over on July 5, 1859 after 19 months of construction. The first tables printed with printer's copy from the machine were the barometer tables by William Gravatt , 1859. In the following years u. a. the life tables (London, 1864) were calculated using the difference machine. The machine was retired in 1914 and given to the Science Museum , London.

Although the Scheutzs only built two differential machines and these machines did not work properly, they managed to create a public for these two machines. In addition to the exhibitions, Scheutz repeatedly demonstrated their machine. In 1857 Scheutz printed a 50-page brochure about the possibilities of the difference machine, including a 29-page logarithm table from 1 to 10,000. The book was sent to all potential buyers of a difference machine. A French edition was completed in 1858.

Reasons for the lack of use of the Scheutz difference machines

Neither Georg nor Edvard Scheutz were so well versed in mathematics that they could use the difference machine to generate new tables themselves. Not that they lacked the skills for the actual arithmetic process, the problem was the determination of the starting values ​​for the arithmetic unit. It was also not clear to them which tables could have been generated profitably. From the present day it can no longer be deduced why, for example, Babbage did not advise accordingly on this point.

In the middle of the 19th century, 'new' tables were usually derived or interpolated from old tables . Scheutz's difference machines, both No. 1 and No. 2, with 8 digits, which could be expanded to 15 digits by a more complex two-step calculation and only 4 differences were not efficient or accurate enough. Babbage Difference Engine No. 1, with 18 digits and 6 differences, had more extensive options to use its Difference Engine No. 2 should contain 31 digits and 7 differences. So Babbage knew about the computational accuracy requirements for creating new tables. It is unclear why he did not get Scheutz to expand their machine accordingly.

Georg Scheutz was elected a member of the Royal Swedish Academy of Sciences in February 1856 to build the difference machine. In April 1856, Georg and Edvard Scheutzer received the gold medal of the Paris World Exhibition and Georg Scheutzer was made a knight of the Wasa Order.

Between 1989 and 1991, in the London Museum Science , the Difference Engine No. 2 built by Babbage to demonstrate the functionality of the design. In 2008, another Difference Engine No. 2 presented at the Computer History Museum in California . It is important to the Science Museum that the two difference machines are not replicas, since Charles Babbage only built a cut-out model and never a functional “whole” difference machine. The machines from 1991 and 2008 are therefore referred to as originals.