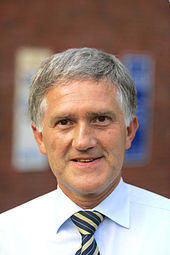 After high school in 1971 at the commercial high school in Osnabrück made screen Beck soldier on time his military service in the Bundeswehr , and also underwent training to become a reserve officer (last rank: Major dR). In 1974 he took over his parents' farm , which he gave up in 1981 to instead work as a developer for residential and shop fitting projects. Georg Schirmbeck has been active in forest policy since 2001, when he became chairman of the Weser-Ems Forest Owners Association and a member of the main committee of the Working Group of German Forest Owners Associations . Since June 5, 2007 he has been President of the German Forestry Council (DFWR); He was last confirmed in office in May 2016 by the general assembly. Since November 2009, Schirmbeck has also been a board member of the specialist agency for renewable raw materials . V.

Schirmbeck worked several times for the OSCE as an election observer in Belarus. Before the presidential elections in 2006 , he was refused entry into the country because of a critical interview in which he described the Belarusian President Aljaksandr Lukashenka as “the last dictator in Europe”. After the 2010 presidential election , however, Schirmbeck turned against allegations of electoral fraud. While other OSCE election observers rated the counting of votes as “bad to very bad”, Schirmbeck stated that the voting and counting in the polling stations he visited were correct. He turned against "criticism from German living rooms" and condemned some statements in Germany as silly. On the other hand, he criticized the so-called “early voting”, which was difficult to control by election observers, and accused Belarus of serious democratic deficits due to the unequal access of government and opposition to the media.

Georg Schirmbeck is married and has two children. 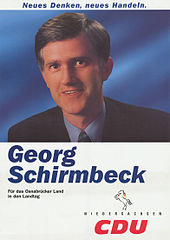 Candidate poster for the state election in Lower Saxony in 1998

Schirmbeck was a member of the municipal council in his home town of Hasbergen from 1976 to 1992 . He had been a member of the district council of the Osnabrück district since 1976 and chairman of the CDU district parliamentary group from 1996 to 2011.

From 2002 to 2013 he was a member of the German Bundestag and since December 2005 treasurer of the Lower Saxony state group of the CDU / CSU parliamentary group .

Georg Schirmbeck has always entered the Bundestag as a directly elected member of the Osnabrück-Land constituency .