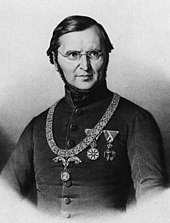 Forndran attended the Carl-von-Linde-Gymnasium Kempten and then studied law at the University of Munich . In 1826 he became a member of the Corps Suevia Munich . From 1829 to 1834 he was active in various internships at higher, middle and lower state authorities. From 1834 he worked as a legally qualified magistrate in Augsburg and in March 1847 he was elected First Mayor, although he was not definitively confirmed until May 1850. In addition, he sat 1848-1852 for the constituency of Augsburg in the Chamber of Deputies (Bavaria) . He was awarded the Bavarian Order of Merit . During his tenure he did a lot for the poor, the main hospital was built and he pushed ahead with hydraulic engineering. In addition, he expanded the streets of Augsburg; the establishment of the Maximilian Museum also fell into his tenure.

See also : List of the Lord Mayors of Augsburg