Müller was born the son of a sacristan and graduated from high school near Sankt Stephan in Augsburg. He then studied economics in Munich and Erlangen. He received his doctorate in 1914 and then took part in the First World War as a soldier . After the war, he became secretary to the board of the Augsburg worsted spinning mill in 1920 , where he later became an authorized signatory. From 1936 he was deputy director of the company.

He was an honorary member of the Catholic student association KStV Ludovicia Augsburg. 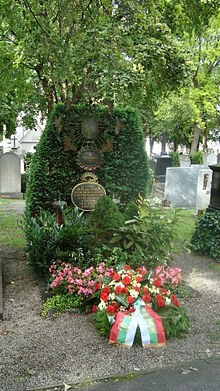 Tomb of Klaus Müller at the Hermanstrasse Catholic Cemetery in Augsburg, photo: 2014

Müller was a member of the BVP from 1922 and from 1939 to 1945 he was head of the Army Relief Society. In 1945 he co-founded the Augsburg CSU, for which he was Lord Mayor of Augsburg from 1947 to 1964. Müller held office from 1956 to 1964 as chairman of the Bavarian city association and the administrative board of the Bayerische Gemeindebank, the predecessor of the Bayerische Landesbank. In 1956 Müller received the Great Federal Cross of Merit and in 1959 the Bavarian Order of Merit . In 1962 he was one of the first to receive the Liebieg Medal . In 1964 he was appointed former mayor and honorary citizen of Augsburg and the Technical University of Munich. He made a name for himself through special contributions to the reconstruction of the city.

See also : List of the Lord Mayors of Augsburg