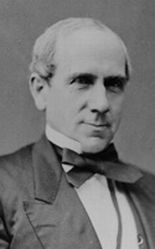 George Grover Wright (born March 24, 1820 in Bloomington , Indiana , †  January 11, 1896 in Des Moines , Iowa ) was an American lawyer and politician ( Republican Party ) who represented the state of Iowa in the US Senate .

George Wright was educated in private schools and graduated from Indiana University in his hometown of Bloomington in 1839 . He then studied in Rockville Law and was admitted to the bar in 1840, and he in Keosauqua in Iowa Territory began practicing. After the territory joined the Union as a state, Wright served as the district attorney in Van Buren County from 1847 to 1848 and served in the Iowa Senate from 1849 to 1851 . Between 1854 and 1870 he was a judge on the state's Supreme Court . He also served as President of the Iowa Agricultural Society from 1860 to 1865 .

Wright moved to Des Moines in 1865. He was one of the founders of the College of Law at the University of Iowa and was a lecturer in the law school at Iowa State University until 1871 . In that year he moved to a successful election in the US Senate in Washington , where he held his mandate until March 3, 1877; he did not stand for re-election. As a result, he worked again as a lawyer in Des Moines and in the banking industry. From 1887 to 1888 he was a member of the American Bar Association .

George Wright died in Des Moines in 1896. His older brother Joseph was governor of Indiana and also sat in the US Senate for that state.