Giocondo Albertolli was born in Bedano on July 24, 1742, the son of the architect Francesco Saverio and his wife Margherita De Giorgi. He received his first training in Aosta at the college. From the age of eleven he trained as a sculptor, draftsman and architect at the Academy of Fine Arts under Giuseppe Peroni in Parma . He stayed there for ten years, working on stucco decorations in churches. He also created the figures of the triumphal arch of Ennemond-Alexandre Petitot , who also had a great influence on Albertolli.

In 1770 Albertolli was finally called to Florence , where he was responsible for decorating the villa of Poggio Imperiale . During this time he also made a trip to Rome and Naples . In 1774 he was commissioned to work at the Palazzo Reale in Milan . It was about the decoration of the government building, which Albertolli accomplished to such an extent that he received many requests from aristocratic citizens to decorate their villas. The government building was designed by Giuseppe Piermarini , who appointed Albertolli and who later worked with him. Together they shaped the architecture in Lombardy .

Design for a stucco ceiling

Albertolli was one of the founders of the Academy of Fine Arts in Brera in 1775 . He was appointed Knight of the Iron Crown by Napoleon in 1809 . He acted as director and professor of the academy's ornamentation school and wrote four standard works on the design training of his time during this time, but had to give up this position to his nephew after 37 years in 1812 because of an eye disease. Nevertheless, from then on he worked as a supervisor of the academy's competitions. In 1807 he was also appointed a member of the Commissione del Pubblico Ornato , called the Beautification Commission, which he remained until 1814. 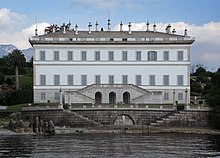 Albertolli's last works were the Palazzo Melzi in Porta Nuova , the Altar of St. Mark in Milan , the Villa Melzi in Bellagio and a house in Lugano in which he later lived. He also lived mainly in Milan, but stayed several times for short periods in his hometown of Bedano, where he also built a house. He finally died on November 6, 1825 in Milan at the age of 83.

Albertolli was married to Marta Caterina De Giorgi and had 15 children. Among others, the son Raphael, who died in 1812, also worked as an architect