The Gloucester Castle was a passenger steamer put into service in 1911, which was used by the British shipping company Union-Castle Line in passenger and mail traffic between Great Britain and South Africa . During the First World War , the ship served as a hospital ship . During the Second World War , the steamer remained in civilian passenger traffic until it was sunk on July 15, 1942 in the South Atlantic by the German auxiliary cruiser Michel . 93 people were killed. The 61 survivors were interned as prisoners of war in Japan. The fate of the ship was only known towards the end of the war; until then the Gloucester Castle had been considered missing. 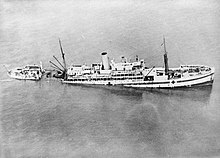 The 7,999 GRT steamship Gloucester Castle was built for the Union-Castle Line at the Fairfield Shipbuilding and Engineering Co. in Glasgow, Scotland , and was launched on May 13, 1911. The ship was 137.98 meters long and 19.87 meters wide and had a maximum draft of 9.36 meters. The twin-screw steamer had a chimney, two masts and was equipped with quadruple expansion steam engines that made 722 nominal horsepower and ensured a top speed of 13 knots. On board there was space for 87 passengers in the first, 130 in the second and 195 in the third class. In August 1911 the Gloucester Castle was completed.

The Gloucester Castle had two sister ships, which were also put into service in 1911 and were built for the express service called London-South and East Africa Intermediate Service in passenger and freight traffic to South Africa. These were the Galway Castle (7,988 GRT), which was sunk by a German submarine near Plymouth in 1918 , and the Guildford Castle (8,036 GRT), which sank on the Elbe in 1933 after a collision with the steamer Stentor of the Blue Funnel Line .

From September 24, 1914, the steamer served as HMHS Gloucester Castle as a hospital ship with 410 patient beds. On March 31, 1917, she was hit with 399 wounded on board near the Isle of Wight by a torpedo from the German submarine UB 32 (Kapitänleutnant Max Viebeg), but did not sink. Three people died evacuating the crew and patients. The ship was towed to Southampton and repaired. On September 9, 1919, the Gloucester Castle was returned to the shipping company and used again in the London-South Africa service.

Gloucester Castle hit by UB 32 from a different perspective

From 1922 it was used for the Africa round-trip service, with two ships of the Union-Castle Line from London through the Suez Canal and over the Cape of Good Hope and two other ships in the opposite direction. During this time, the ship received the nickname Go, Slowster Castle (in German roughly "Go, slow castle") because of its low speed . In 1927 the Gloucester Castle was replaced on this route by the new Llandaff Castle and from then on only went to ports on the South African west coast.

Because of their age which was Gloucester Castle finally in Netley Abbey launched and sold for demolition. After the outbreak of the Second World War, ships were needed again and the now 28-year-old steamer was used again in civil service from England to South Africa from September 1939.

On Sunday, June 21, 1942, the Gloucester Castle, under the command of 59-year-old Captain Herbert Harold Rose, left Birkenhead with passengers, mail and cargo for a trip to Simon's Town in the Western Cape Province of South Africa . Among the passengers were twelve women and two children who were to be reunited with their husbands and fathers respectively at Simon's Town Naval Dockyard. The journey should then continue to Cape Town , Port Elizabeth and East London . The Gloucester Castle initially drove in the convoy OS.32, which consisted of 44 ships, but this disbanded after a few days because the ships headed for destinations in different directions.

On August 31, 1942, the Shipping Casualty Department of the British Admiralty reported to the shipping company that the ship was gravely late (roughly "seriously delayed") and therefore had to be reported missing. For years there was no sign of its whereabouts. It was not until the end of the war that the Red Cross received information that survivors of Gloucester Castle were in Japanese captivity.

On Wednesday July 15, 1942, Gloucester Castle was off Ascension Island , about 1,300 miles southeast of Freetown . It was warm and stuffy all day with tropical showers. After dark the ship was blacked out. The lookout saw nothing suspicious. At around 7 p.m., the unarmed and unescorted ship was attacked by the German auxiliary cruiser Michel (Captain Hellmuth von Ruckteschell ) without warning. There was a loud bang on starboard as the first shell hit the side.

The bombardment was initially aimed at the navigation bridge and the radio station , so that no emergency call could be made. The radio antenna was shot down and the radio operators were killed instantly. More grenades followed, as well as machine gun fire and 37 mm anti-aircraft guns . The second shell hit the dining room at the far end of the deckhouse, where the first passengers had gathered for dinner. The hall quickly went up in flames. The ship hit was listed , which increased rapidly. It is not known how many people were killed in the shelling.

All of the lifeboats on the starboard side had been shot off or so badly damaged that they could no longer be used. Second mate R. Pargitter, who was on the bridge at the time of the attack, hurried to the port side of the boat deck and tried to launch lifeboat No. 3 with his own hand. Just as he had put a woman and a child in the boat, Gloucester Castle leaned heavily to port. The ropes in which the boat was hanging broke, so that the boat swung violently and threw the woman and child into the sea. As the lake water reached them, an officer yelled to a group of passengers standing at the railing of the boat deck to jump.

There was no time for further evacuation attempts; the Gloucester Castle sank in less than ten minutes. Captain Rose, 81 crew members, three male and six female passengers and the two children were killed. The 61 survivors were taken on board the Michel as prisoners of war , later transferred to the tanker Charlotte Schliemann and finally brought to Yokohama , where they were interned and had to do forced labor . Two of them died in captivity. The survivors were only able to report on the sinking and the appalling conditions under which they had to live and work after their liberation after the end of World War II. Hellmuth von Ruckteschell, the commander of the auxiliary cruiser, came before a British military tribunal after the end of the war for violations of international naval law and was sentenced to ten years in prison. He died in custody in 1948.