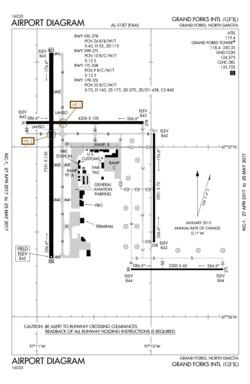 The airport is operated by the Grand Forks Regional Airport Authority , a joint body of the City of Grand Forks and Grand Forks County.

Of the 967 flight movements per day, 71 percent can be assigned to general aviation and 28 percent to air taxi traffic. Scheduled flights make up a little less than one percent. There are also some military aircraft movements. The vast majority of aircraft movements are operated by and for the John D. Odegard School of Aerospace Sciences at Grand Forks-based University of North Dakota . The title International Airport is based on the cross-border flight movements of general aviation including the necessary customs and border clearance facilities.

The airport area is 8 miles west of Grand Forks. The US Highway 2 runs directly past the airport. A few kilometers east of the airport runs Interstate 29 , which is the shortest connection from Kansas City in Missouri to Winnipeg in the Canadian province of Manitoba .

The airport has four runways, the longest of which has an asphalt surface. The other three are paved with concrete. There is a passenger terminal with a baggage handling system and two passenger boarding bridges . Several rental car companies have bases in the reception building.

Airports in the US state of North Dakota