The large-flowered vetch ( Vicia grandiflora ) is a species of the genus Vicia in the subfamily of the pea-buds (Faboideae). 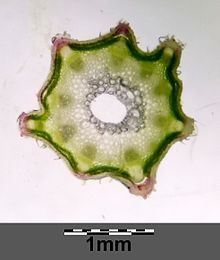 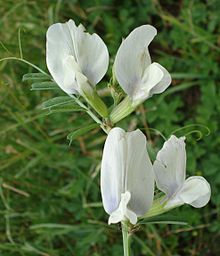 Inflorescence with zygomorphic flowers in detail 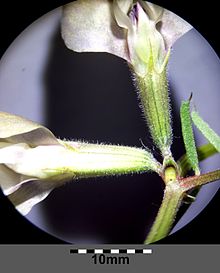 Calyxes with straight teeth, almost equally long among each other. The stipules show a nectarium (bottom right in the picture). 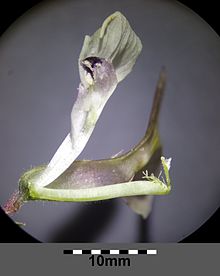 Open flower, visible is the stamen tube cut at an angle at the front.

The large-flowered vetch is an annual or hibernating annual herbaceous plant . The fluffy hairy to almost bald and fresh green stem is 30 to 60 centimeters long, ascending, branched from the base and with a round stem .

The pinnate leaves have three to seven pairs of thin, very differently shaped leaflets with weak, mostly knotty tendrils. The leaflets of the lower leaves are obovate to inverted heart-shaped, usually less than 1 cm long, often deeply edged and equipped with a few lateral nerves. The upper leaves are obovate to linear, about 1 to 2 centimeters long and 2 to 8 millimeters wide, rounded, trimmed or edged and briefly pointed with up to twelve pairs of straight side nerves. The stipules are relatively small, the upper ones egg-shaped, with entire margins, the lower ones semi-spear-shaped, with small nectaries underneath and somewhat serrated.

The flowering time is in the months of May and June. The flowers stand protruding on 2 to 8 millimeter long stems, usually in twos, in the leaf axils. The hermaphrodite flowers are more or less 2.5 to 3 centimeters long and zygomorphic and five-fold with a double flower envelope . The five sepals have grown together to form an 8 to 10 millimeter long calyx tube with a bulging base and the lanceolate, awl-shaped, straight calyx teeth are significantly shorter than the calyx tube. The crown has the typical shape of the butterfly flower . The five petals are pale yellow, with the flag, often also the tip of the boat, more or less purple to greenish. The flag plate is up to about 2 inches long and almost as wide, shallow and bare. The wings are only about twice as long as the chalice and longer than the shuttle.

The initially short-haired, when ripe, bald and black legume is linear and flat with a length of 3.5 to 5 centimeters and a width of 6 to 8 millimeters.

With a diameter of 3 to 3.5 millimeters, the seeds are flattened, spherical and brown with washed-out, black spots.

The large-flowered vetch is widespread from southeast Europe to Italy , southern Austria , east to Ukraine , Asia Minor , the Caucasus and Iran . Vicia grandiflora is an east-sub-Mediterranean floral element .

In Central Europe , Vicia grandiflora has only been introduced and is inconsistently wild.

In Germany, for example, it occurs in the wine-growing areas between the Middle Rhine , Moselle Main and the Neckar estuary, as well as on the lower reaches of the Regen and in the Hallertau . In Germany, the large-flowered vetch occurs only in advent and is naturalized in many places. In Bavaria, the large-flowered vetch is only widespread in the Main and Danube areas, otherwise mostly absent. The large-flowered vetch can be found more often in the eastern part of Germany in particular. Between 1994 and 1997 she was u. a. proven on a former military training area in the Kleckewitzer Heide (also Alt-Jeßnitz-Raguhn ).

It rarely occurs in Lower Austria and at the foot of the Alps . In Austria the large-flowered vetch is more common only in the eastern part; otherwise it is rare.

As a volatile adventitious plant, Vicia grandiflora is dependent on new seedings from introduced diaspores , so that the occurrence is more or less random. However, it seems to be steadily "gaining a foothold" in the large river valleys such as the Main and Danube.

The large-flowered vetch grows in meadows , grain fields , hedges and in ruderal areas . It colonizes dry bushes and the edges of dry forests in Central Europe in areas with a warm summer climate, but it also goes to wasteland and railway gravel. It thrives in Southeastern Europe in companies of the Orno-Ostryon association. The large-flowered vetch thrives best in nutrient-rich , loamy soils .