Hamersleben is a district of the municipality Am Großen Bruch in the Börde district in Saxony-Anhalt . The place is known for the Hamersleben monastery .

Hamersleben was first mentioned in a deed of donation from Emperor Heinrich II in 1021.

In Hamersleben is the church of the Hamersleben monastery , founded in 1107 , which was established as a former Augustinian canon monastery in the Halberstadt diocese . Here Hugo von St. Viktor received his first training before going to Paris.

From 1820 the lignite mines Friederike , Marie and Ludwig zu Hamersleben and from 1854 the colliery Columbus near Hamersleben were located. Since then, the place has been characterized by lignite mining. The north-east lying lake Herzspiel emerged from the collapsed shafts of the former United Friederike mine . The open-cast mine of the union Vereinigte Friederike was closed in 1924.

In 1856 a sugar factory opened , of which you can only see the residential building on Fabrikstrasse today. In 1857, Andreas Kremmling Senior (1818–1897) founded a bread and rusks factory, which resulted in the OKA special machine factory in 1927; This closed in 1939 due to a lack of material and relocated to Darmstadt in 1948 - the company still exists today. In addition, the master baker Wilhelm Kinkartz from Aachen was the managing director of the Kinkartz Vorweidener Kraftzwieback factory around 1936/37, the Kinkartz company also still exists today and is part of the Lambertz Group. On September 30, 1928, the Hamersleben monastery district was merged with the Hamersleben rural community. There was a motor mill on the Mühlenberg that burned down in the early 1950s. 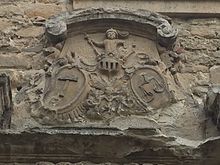 Coat of arms of the monastery

The hammer is derived from the interpretation of the term "Hamer", which comes from Old High or Middle German. On the other hand, the hammer is also on coats of arms, which date from the years 1751 and 1766 and can be found on the monastery grounds. Also in the church seal, St. Pancras holds a hammer next to the spear. The colors correspond to those of the former Diocese of Halberstadt, to which Hamersleben once belonged.