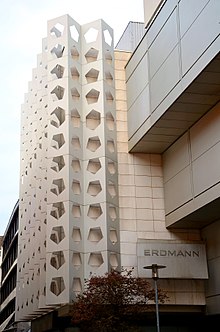 Play of light when the sun is setting

The Erdmann house , also called Erdmann-Haus or simply Erdmann-Bau , was a department store built in the 1950s by the men's outfitter Erdmann-Clothes. The location of the office building, temporarily the largest specialty store for men's outerwear in Lower Saxony , was Große Packhofstraße 34 and Heiligerstraße 8 in Hanover's city center in the Mitte district .

After the founding of the later company with the company name Erdmann-Clothing in the early 1930s, which initially had its headquarters on Karmarschstrasse and Ständehausstrasse, the company founder soon acquired a commercial building on Grosse Packhofstrasse and Heiligerstrasse: according to the Hanover city address book the entire building at Große Packhofstrasse 34 at the corner of Heiligerstrasse was still used in 1934 under the name “L. Weinberg ”for the sale of women's clothing. The owner was the merchant Louis Weinberg, who lived privately at Rathenauplatz 7 or at Adolf-Hitler-Platz, which had already been renamed in the same address book .

At the new Erdmann location, only the ground floor and the first floor were initially used to sell men's fashion, while the offices and a tailor's workshop were set up on the second and third floors. As a result of the air raids on Hanover during World War II , the building fell victim to aerial bombs in the 1940s and burned down completely.

After a transitional period and a makeshift maintenance of operations in a joint shop, a new building based on plans by the architect Ernst Friedrich Brockmann was built in the post-war period in place of the older department store until 1953 . The architect of the New Objectivity erected a five-storey building here, which on its narrow side facing Grosse Packhofstrasse was almost fully glazed with vertical windows that emphasized the new height. Brockmann designed this curtain wall "for the first time in the Erdmann building".

In view of the increasing demand during the so-called “ economic miracle ”, the premises were no longer sufficient in 1955, so that a long extension was added to the neighboring property in Heiligerstrasse. At the opening of the men's trend shop in the basement of the Erdmann-Haus, which was set up for the first time in Hanover, the then little-known rock band called Scorpions played : There were massive complaints from neighbors due to the " noise " - and after the event there was only a surplus of the equivalent of only 4.50 euros in the cash register.

In 1992 the Erdmann house was redesigned again, again in 2006, the year of the celebrations for the company's 75th anniversary. But a short time later, at the beginning of 2009, the entire company closed "because there was no one in the family or outside who wanted to continue it".

After the property was bought by an investor from Düsseldorf , a new building was planned at a cost of 35 million euros. After temporary use by a supplier of decorative items on the ground floor of the building - the rest remained empty - from November 2014 - the Erdmann fashion house was demolished.

The building owner and project developer for the site, Development Partner AG , based in Düsseldorf, had already found a tenant in the fashion company Reserved , based in Poland: after the foundation stone was laid and the topping-out ceremony six months later by craftsmen and construction managers in October 2015 Architects Höhlich & Schmotz from Burgdorf designed the interior for Reserved. The company Gesellschaft für Informationssysteme (GIS), previously located at the Expo Plaza, was the user of the two upper floors .

After the fashion chain Reserved had established its first shop with women's, men's and children's clothing in Hanover in 2014 in the Ernst-August-Galerie , the company opened its second location in the state capital in mid-March 2016 at Große Packhofstraße 34-35 the thirteenth branch in Germany. The opening, with numerous special promotions, at which up to 500 mostly young people crowded three floors at the same time, was moderated by "the It Girl " Bonnie Strange .