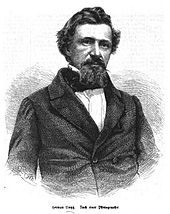 Hermann Lingg , from 1890 Ritter von Lingg , (born January 22, 1820 Lindau ; † June 18, 1905 Munich ) was a German poet and medicin. As a lyricist and epic poet , he devoted himself particularly to composing ballads , but also wrote dramas and short stories . His cousin Maximilian von Lingg was Bishop of Augsburg.

Lingg completed his schooling at the Royal Bavarian school Kempten and then studied medicine at the universities of Munich , Freiburg , Berlin and Prague , received his doctorate in Munich in June 1843 with a thesis on the correlation of history of medicine and a history of the disease and resigned as assistant physician in the Bavarian Army . His battalion was used to suppress revolutionary uprisings in Baden (most recently in Rastatt and Donauwörth ). When he had to act contrary to his convictions (among the revolutionaries there were also some of his childhood friends), he fell into severe depression and paranoia, fled to the woods, was admitted to the military hospital in Munich in July 1849, released to relatives a few weeks later, in September In 1849 he was brought to the Winnenthal sanatorium , whose director Albert Zeller released him as cured in March 1850. Lingg moved to Munich, where he was retired and from then on devoted himself exclusively to historical and poetic studies, financially supported by King Max II .

A pension and occasional financial support from friends such as B. Max von Pettenkofer and Justus von Liebig as well as the German Schiller Foundation enabled Lingg, who had re-stabilized psychologically, an adequate life. In 1854 he married a forest ranger's daughter. He met the writer Emanuel Geibel, who introduced him to the Munich poet group Die Krokodile . He wrote many poems, including the eponymous " The Crocodile of Singapore ".

His main estate is in the Bavarian State Library in Munich.

Lingg's grave can be viewed at the Old North Cemetery in Munich.

In 1906 a street in Munich was named after him (Hermann-Lingg-Strasse), as were the Linggstrasse in Nuremberg , Kempten (Allgäu) and Lindau (Lake Constance) .

Since 1839 he was a member of the Corps Suevia Munich . 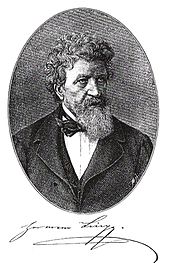 Hermann Lingg, approx. 1890
Wood engraving from the picture atlas on the history of German literature by Karl Friedrich Gustav Könnecke