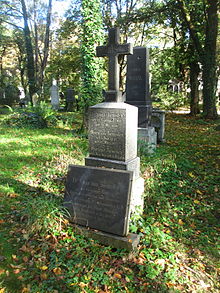 Two years later he became professor of clinical medicine at the University of Erlangen and received the chair for special pathology and therapy. During the Franco-Prussian War of 1870/71 , he led a medical train from Nuremberg to France and worked in the Metz hospitals on behalf of an auxiliary committee .

Ziemssen moved to Munich in 1874, where he took over a chair at the Ludwig Maximilians University in Munich and became director of the Municipal General Hospital (hospital on the left of the Isar). Until 1885 he headed the 2nd Medical Clinic and from 1885 the 1st Medical Clinic. In 1877 he founded the first German clinical institute. Ziemssen was dean of the medical faculty in Munich several times and in 1890 also rector of the university. He is one of the most important doctors of the second half of the 19th century and was the author of many specialist books.

Ziemssen was chairman of the 13th Congress for Internal Medicine, which took place from April 2nd to 5th, 1895 in Munich. In 1896 he was chairman of the Society of German Natural Scientists and Doctors . In 1898 he initiated the chair for hydro-, mechano-electrotherapy and physical medicine at the University of Munich. In 1899 he became an honorary citizen of the city of Munich .

With special electrophysiological examinations, Ziemssen was able to prove in 1882 that electric shocks lead to a change in the heart rate: he stimulated the heart of the patient Catharina Serafin, a 46-year-old day laborer from Upper Silesia, who had surgically removed an ecchondroma of the ribs and resected the left one anterior chest wall was only covered by a thin layer of skin, with Faraday's and galvanic currents, which led to a decrease in heart rate.

In recognition of his achievements, a street was named after him in 1903 , which is located at what is now the Medical Clinic downtown of the Ludwig Maximilians University. In addition, the Inner City Medical Clinic awards the Hugo Wilhelm von Ziemssen Prize every 2 years for outstanding scientific publications on medical issues. The German Society for Cardiology - Heart and Circulatory Research (DGK) has awarded the Hugo von Ziemssen Poster Prize annually since 2002.