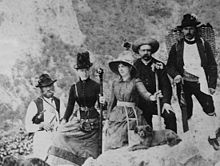 Ida Ferenczy von Vecseszék (born April 7, 1839 in Kecskemét in the Hungarian Plain / Kingdom of Hungary ; † June 28, 1928 in Vienna / Austria ) was a Hungarian noblewoman (landed gentry) who was in the service of Empress Elisabeth of Austria-Hungary from 1864 was standing.

Ida Krisztina Veronika Ferenczy von Vecseszék comes from a family of the Hungarian nobles in Kecskemét. She was the fourth of six children from Gergely Ferenczy and his wife Krisztina nee. Szeless. Their education corresponded to the average of the girls in their social class in what was then the Hungarian province. Girls of their social class were expected to learn German as a foreign language in addition to reading and writing and then marry as well as possible. However, Ida continued her education as an autodidact . The Hungarian writer Ida Miticzky taught her a feeling for literature, which she also trained as a reader.

At the Kaiserhof in Vienna (In the service of Empress Elisabeth)

The Empress Elisabeth developed an extraordinary sympathy for the Hungarian nation at a young age. That's why she decided in 1863 to learn the Hungarian language. In the person of the publicist and politician Maximilian Falk , she also found a suitable teacher who not only encouraged her in the field of the Hungarian language, but also instructed her in Hungarian history, literature and culture. He recorded his encounters with the Queen in written memoirs, which were published in book form in Budapest in 1898 under the title Erzsébet királynéról -visszaemlékezések ( Eng . "About Queen Elisabeth - Memories") .

During this time the Empress decided to surround herself with Hungarian ladies- in-waiting. She was presented with a list of ladies of the Hungarian aristocracy, from which she should make her choice. At the bottom of this list was the name Ida von Ferenczys. According to Maximilian Falk, the name was added with a different handwriting from the other names. How the name of a lady from the lower nobility came on the list could never be finally clarified. The empress chose this name of all things and asked Ida von Ferenczy for a picture.

Both women immediately fell in love with each other when they first met. While the Empress was impressed by the natural, open nature and sincerity of her peers, Ida Ferenczy was deeply impressed by the monarch's charm and intelligence as well as by the striking beauty. Until the violent death of the Empress, she was to belong to the circle of “apartment-like ladies” who had access to Elisabeth's private apartments at any time. Ida von Ferenczy developed into the “friend” of the Empress, she was the only one who was used by the Empress (apart from members of her own family).

Over the years she achieved an important position in the empress's environment. Many important Hungarian politicians, such as B. Ferenc Deák and Gyula von Andrássy got through the mediation of Ida von Ferenczys access to the Empress and Franz Joseph respectively .

Ida von Ferenczy accompanied the Empress of Austria (from 1867 also Queen of Hungary ) on her extensive travels, teaching her, especially after the compromise with Hungary in 1867, in her native Hungarian .

Because of her discretion and unconditional loyalty to her queen and friend, she has been given various responsible and sometimes delicate tasks over the years.

For example, at a masquerade ball in Vienna in 1874, she arranged the desired flirtation between Empress Elisabeth, masked as a "domino" and incognito present, with Friedrich List Pacher von Theinburg , a ball-goer who the monarch mistakenly assumed until the end of her life that he did not recognize her would have.

Ida Ferenczy also acted as a receptionist for the Viennese castle actress Katharina Schratt in the Hofburg , whom the Empress had given her husband Emperor Franz Joseph as a “dear good friend” during her frequent hunting trips and escapes from the world.

In 1890 she was awarded the Star Cross Order at the express request of the Empress .

The Geneva tragedy in which the Empress was murdered in 1898 was a severe blow of fate for Ferenczy. She, who spent almost forty years at Elisabeth's side and therefore never married, exclaimed: “With the death of Queen Elisabeth I lost everything”. Together with the empress daughter Marie Valerie (the “Hungarian child”), who is also close to her , she arranged the estate of the empress. She kept a large part of the empress's written estate (after her murder in Geneva in 1898) until her own death. After Elisabeth's death, Ferenczy had to move out of the Hofburg. She lived first in Vienna 's Reisnerstrasse, later in the Schönbrunn district.

She survived the Empress by thirty “long years”. During this time she also had to experience the death of Maria Valeria (1924), Elisabeth's favorite daughter. She also survived the chief steward of the Empress Ferenc Nopcsa (* 1815, † 1904), as well as her companion, the lady-in-waiting of the Empress Countess Maria Festetics († 1923).

After Elisabeth's death, Ida Ferenczy founded the Queen Elisabeth Memorial Museum in Budapest in 1899 , which opened on January 15, 1908 in the Ofen Castle. The museum existed until the end of the Second World War , but large parts of the museum were destroyed during this time.

Ida von Ferenczy died at the age of 89 on June 28, 1928 in Vienna and was buried in her place of birth, Kecskemét, in the family crypt of the Ferenczys at the Trinity Cemetery.