Jerry Rubin (born July 14, 1938 in Cincinnati , Ohio , † November 28, 1994 in Los Angeles ) was a well-known American activist in the 1960s and 1970s and anarchist . He led some of the earliest protests against the Vietnam War and was tried for the violent attacks at the Democratic Congress .

Rubin was the son of a bread supplier and union representative. He grew up near Abondale, Cincinnati , a wealthy area at the time. He attended Walnut Hills High School and was co-editor of the school newspaper The Chatterbox . In high school, Rubin began writing about high school sports for the Cincinnati Post . He later graduated from the University of Cincinnati with a degree in sociology .

Rubin's parents both died 10 months apart, so that from then on he had to look after his younger brother Gil. Jerry wanted to show Gil the world and decided to take him to India . When relatives threatened to challenge his custody rights for his brother, Jerry decided to go to Tel Aviv with his brother instead . Gil learned Hebrew and later decided to stay in Israel and move to a kibbutz .

Rubin first attended the University of Berkeley . In 1964, however, he broke off his education in order to concentrate on his political activities. His first protest took place in Berkeley . It was about a retailer who refused to hire black people. Rubin soon led the protests independently.

He organized the VDC ( Vietnam Day Committee ), led a few of the first protests against the Vietnam War and was co-founder of the Yippies (Youth International Party) with Abbie Hoffman , among others .

On November 14, 1994, Rubin was hit by a car while crossing Wilshire Boulevard in front of his Los Angeles apartment . He died from serious injuries on November 28, 1994 at UCLA Medical Center .

He was buried in Hillside Memorial Park Cemetery in Culver City . 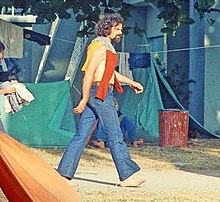 Rubin was instrumental in disrupting the 1968 Democratic National Convention in Chicago . He was tried along with six others (Abbie Hoffman, Rennie Davis , John Froines , David Dellinger , Lee Weiner and Tom Hayden ). Bobby Seale was also part of this group but was later expelled. The charges were of conspiracy and crossing of national borders with the intention of inciting a popular riot. Julius Hoffman was the presiding judge. The defendants were generally referred to as the Chicago Eight, or - after the expulsion from Bobby Seale - as the Chicago Seven . The defendants turned the courtroom into a circus. Five of the seven remaining defendants were found guilty of instigating a popular uprising, but the verdict was later overturned on appeal .

Jerry Rubin's social criticism was published in Do it! - Scenarios of the Revolution , written down. The introduction was written by the co-founder of the Black Panthers Eldridge Cleaver and the unusual design is by Quentin Fiore . The German first edition appeared in 1971 as a paperback in a translation by Mark W. Rien. and in the same year reached a circulation of 30,000 copies.

After the end of the Vietnam War, Rubin changed his political views and became an entrepreneur and businessman. An early investment in Apple - shares he became a multimillionaire.

In the Abbie Hoffman film, Steal This Movie , Rubin was played by Kevin Corrigan .