Johann Zimmermann , from 1877 Johann Ritter von Zimmermann , (born March 27, 1820 in Pápa , Hungary ; † July 2, 1901 in Berlin ) was a German locksmith, factory manager, inventor and entrepreneur . He is considered to be the founder of machine tool construction in Germany. 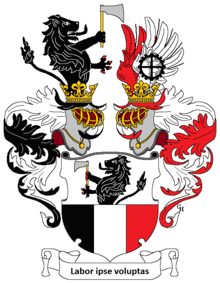 Johann Zimmermann came to Chemnitz in 1839 and founded the first machine tool factory in Chemnitz. His plant, built there in 1848, was the first factory in Germany and continental Europe to manufacture machine tools. Chemnitz thus became the cradle of German machine tool construction and one of the most important mechanical engineering locations in Germany until the end of the Second World War .

Zimmermann later became a Knight of the Legion of Honor and an honorary member of the Académie Nationale . He also carried the honorary title of a royal Saxon commercial councilor (later the secret commercial councilor ). Chemnitz and his hometown Pápa honored him with the award of honorary citizenship . Zimmermann was also raised to the Austrian knighthood on January 25, 1877 in Vienna, with the award of the Austrian Order of the Iron Crown 3rd Class . The Saxon recognition of the nobility was received on May 23, 1878 in Dresden by his sons Maximilian, director of the Zimmermann machine tool factory in Chemnitz, and Johannes Ritter von Zimmermann, later a banker and royal Saxon lieutenant in the Landwehr . 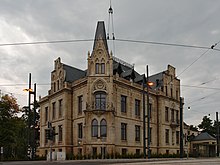 He had the Villa Zimmermann built as a residence by the Hanoverian architect Otto Goetze in Chemnitz from 1865 to 1867 (Carolastraße 9; opposite the main train station) and lived in it until 1884. The villa itself is one of the most valuable monuments of neo-Gothic residential architecture in Saxony in the 19th century . Since it was sold to Julius Wolf , the building served as a hotel from 1884 and years later, the Hotel Carola itself was joined by a neighboring building. Both buildings survived the bombing raids in World War II and served as the headquarters of the Soviet military administration after the war .

From the 1950s until the fall of the Berlin Wall , it was used as a hotel again by the HO . The hotel closed in 1990 and then began to deteriorate. Despite many reminders to the changing owners, both houses fell into disrepair and the dry rot settled on. While the villa could be secured by means of subsidies from the Free State, the historic Carola Hotel was demolished in 2007 due to a lack of usage concept, an excessive purchase price and as a concession to the new owner of the villa, who only wanted to renovate the villa himself, despite protests from many Chemnitz citizens . After one and a half years of renovation, Villa Zimmermann was able to open as a gastronomic facility (potato house, dance club 1866 and a lounge) on December 4, 2008, but had to close again at the end of May 2009 due to bankruptcy .