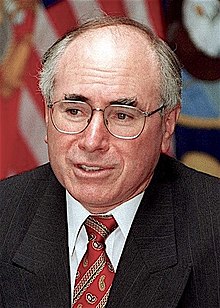 John Howard studied law at the University of Sydney . After graduating in 1961, he worked as a lawyer and judge. Howard has been a member of the Australian Parliament since 1974 . He represents the constituency of Bennelong here . In the government of Malcolm Fraser and Doug Anthony , he was Minister for Economic Affairs and Consumers (1975–1977) and Secretary of the Treasury (1977–1983). From 1985 to 1989 Howard was opposition leader, 1996-2007 Prime Minister.

On March 11, 1996, Howard was appointed Prime Minister and in April Australia was shaken by the Port Arthur massacre . Howard then introduced restrictions on access to semi-automatic firearms. His plans to partially privatize the Australian telephone company Telstra were rejected by the Senate . Five ministers had to be prematurely dismissed because of conflicts of interest with the rules he had drawn up, and he could only keep two more by abolishing the rules of a “clean government” he had drawn up. Howard modernized tax law and introduced a sales tax with the exception of individual foods.

Howard made a U-turn in Australian East Timor policy. Australia was the only one in the world to have de facto recognized the annexation of East Timor by Indonesia by establishing the sea border between Australia and occupied East Timor with the occupying power in the Timor Gap Treaty ; In favor of Australia. Now the East Timorese people were pushed for the right to self-determination. Howard followed the position of the opposition Australian Labor Party and the opinion of 90 percent of Australians who viewed their country's previous behavior as a mistake. In a letter to Indonesian President Habibie , Howard suggested an autonomy solution for East Timor and a subsequent referendum on the country's future. For Habibie, the letter was, according to his own statements, the last trigger to initiate an independence referendum in East Timor in 1999 . When the East Timorese spoke out in favor of independence, a wave of violence by Indonesian security forces ensued , so that the international intervention force INTERFET had to be deployed under the leadership of Australia . Australia continued to provide troops and other personnel for UN missions to stabilize East Timor until 2012.

He received international criticism during his second term in office when, with the help of the military, he refused entry into Australian waters and into Australian territory for the Norwegian freighter MS Tampa because it had taken in Afghan refugees from a no longer seaworthy refugee ship. Howard incorrectly accused the asylum seekers of throwing their children overboard in order to force illegal entry. The behavior of the Australian government sparked a diplomatic dispute between Norway and Australia that came to be known as the Tampa Affair . After the Norwegian captain Arne Rinnan had sent an SOS emergency call and penetrated Australian territorial waters off Christmas Island, the refugees were brought on rubber boats from the MS Tampa to the Australian troop transport HMS Manoora by an Australian military special unit . With this measure and the immediate passage of a new border protection law, the Border Protection Bill 2001 , the Australian government prevented the boat people from entering Australian soil, as this would have resulted in a legal right to apply for asylum. The boat people were transported on the troop transport to Nauru , an island state , to the Nauru Regional Processing Center , and 131 refugees were transported from Nauru by air to New Zealand as asylum seekers. The refugee camp on Nauru is a refugee camp financed by Australia and operated by islanders. The so-called "Pacific Solution" was later extended to Manus with the Manus Regional Processing Center with additional camps outside Australian territory . In connection with the Tampa affair, the opposition did not protest against the government's tough refugee policy. Howard thus appeared to the Australian electorate to be a strong man, and the terrorist attacks on September 11, 2001 encouraged this tendency and Howard won the general election on November 10, 2001 .

Since the bomb attack in Bali in 2002, which mainly killed Australian citizens, Howard has been one of the strongest supporters of George W. Bush in his " war on terrorism ". In March 2003, John Howard justified the sending of Australian troops and ships to support the United States and Great Britain in the invasion of Iraq with the need to remove Saddam Hussein from power because he possessed weapons of mass destruction . Australian opinion on the Iraq war was clearly divided and Howard's popularity ratings fell sharply when no weapons of mass destruction were found.

In October 2004, Howard was nonetheless confirmed for his fourth term. After his Liberal Party also had a majority in the Senate, he was able to push through the complete privatization of the semi-state telecommunications company Telstra. A revision of the penal code in the sense of improved anti-terrorism measures was initially supported by him in the planning phase, the revised version was approved by the House of Representatives , but not signed by himself.

He also attracted attention and criticism when he officially refused to apologize for what white Australians did to the Aborigines over the past centuries because he did not feel guilty for it. In addition, he refused to sign the Kyoto Protocol to reduce greenhouse gas emissions - also here in line with George W. Bush - because climate protection had to be subordinate to the interests of business.

Before the primaries for the presidential election in the USA he warned very directly against the election of the candidate Barack Obama because of his alleged Muslim roots and his position on the future of Iraq.

In November 2007, his governing coalition lost the parliamentary elections . Howard also lost his own constituency in Sydney. Observers attribute this to the dissatisfaction of the population with Howard's policies, which are perceived as anti-social, and to the desire for a change after ten years of conservative government.

After the end of his work as Prime Minister Howard looked for new offices, so he was u. a. Chairman of the International Democratic Union for 12 years until 2014 . In 2010, his autobiography Lazarus Rising: A Personal and Political Autobiography was published .

Wikinews: John Howard  - on the news