The title of this article is ambiguous. For the Austrian master builder and architect of the same name, see Josef Gerl (architect)

Photo by Josef Gerl, with comments after his death

Gerl's family came from Bohemia and came to Vienna during the Danube Monarchy . Josef Gerl did an apprenticeship as a goldsmith ; However, after completing his apprenticeship and the statutory retention period, he was dismissed. The economic crisis deprived him of all livelihoods.

Gerl had been a member of the Socialist Workers' Youth (SAJ) since 1929 and was active in the SAJ group “Prater” in Vienna- Leopoldstadt .

In 1934 Gerl took part in the February fighting , then fled to Czechoslovakia and soon afterwards returned to Austria to take up the fight against Austrofascism .

On the evening of July 20, 1934, Gerl, together with the hat maker assistant Rudolf Anzböck, carried out an explosive attack on a signaling system on the Danube riverbank , which caused only minor damage.

Then Gerl and Anzböck wanted to flee to Czechoslovakia, but missed the last train by a few minutes. So both spent the night July 21, 1934, one near the Ostbahnhof nearby cafe and after its lock in the open. At around 4 a.m., the patrolling police superintendent Ferdinand Forstner became aware of the two of them in a park on Keplerplatz in Vienna-Favoriten and checked their identity papers. When Forstner finally wanted to do a body search, Gerl drew a pistol, fired twice at the guard and seriously injured him (33-year-old Forstner died three weeks later from the serious injuries that Gerl had inflicted on him).

Gerl and Anzböck were arrested after a dramatic chase. In the subsequent police interrogation, they confessed to the bomb attack, which otherwise could hardly have been proven.

Because of their admission that they had planned and carried out an explosive attack, Gerl and Anzböck were referred to a court martial . Standing procedures for certain offenses were introduced on November 10, 1933 by the Dollfuss government. On July 12, 1934, because of the numerous bomb attacks carried out at the time, most of which were carried out by illegal National Socialists , the court courts also transferred responsibility for offenses in connection with bomb attacks and the illegal possession of explosives. 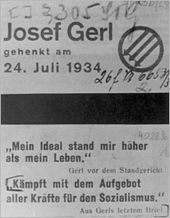 The procedural proceedings were conducted by a senate consisting of four judges and a public prosecutor and lasted a maximum of three days per case. When the unanimous affirmation of who is at fault, the process ended with a death sentence within three hours Würgegalgen was to be executed. No legal remedy was permitted against the judgment of the stand judge, only a pardon by the Federal President was possible.

In the context of the court hearing under the jurisdiction of the higher regional court Dr. Alois Osio explained to Gerl that he was "no longer so firmly within the framework of social democracy" but that he sympathized with the National Socialists. However, this was possibly only a protective claim, since the attack - according to Gerl in the interrogation immediately after his arrest - should be blamed on the National Socialists for the benefit of the Social Democrats.

Because of the bomb attack, Gerl and Anzböck were sentenced to death by the trial court on July 24, 1934. Anzböck was pardoned by the Federal President , Josef Gerl, on the other hand, was hanged on the choke bar on the same day .

During the Spanish Civil War , a company of the International Brigades made up of Austrians was given the name "Josef Gerl".