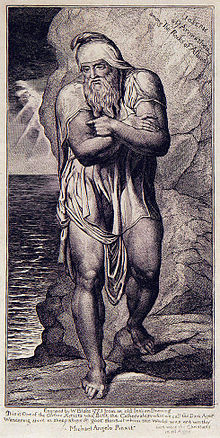 Joseph of Arimathea or Joseph of Arimathia was a wealthy Jew and probably a member of the Sanhedrin , the ancient Jewish court in Jerusalem . Arimathäa is the Greek name of his place of origin Ramathaim .

Other well-known forms of name are:

As a precautionary measure, Josef had already chosen his own grave. It was near the crucifixion site Golgotha , where Jesus was buried, from where he, according to the Bible report, as Savior on the third day after his death was resurrected .

After a legend, Joseph of Arimathea collected in the crucifixion of Christ's blood in a chalice. According to legend, the blood came from the side wound that the Roman centurion Longinus had inflicted on Jesus with the Holy Lance . Joseph used the chalice from the Last Supper for this .

The apocryphal Acta Pilati (5th century) continue the story of Joseph of Arimathea. When the body of Jesus disappeared from the grave after the resurrection , Joseph of Arimathea was arrested, accused of stealing the body and sentenced to 40 years in prison. In the dungeon Christ appeared to him, gave him the cup of the Lord's Supper and appointed Joseph of Arimathea to be the keeper. Saint Joseph is said to have survived the dungeon only because of the power of the chalice. Every day a pigeon came and put a piece of bread on it.

After his release from prison, the aged Josef is said to have turned his back on his homeland. Thereafter, Josef (or his brother-in-law Bron with his son Alan) is said to have brought the Grail to England and built a chapel there in Glastonbury , Somerset . This burned down in 1184 and was replaced by the construction of Glastonbury Abbey . Henry VIII destroyed this abbey in 1539, which is why only ruins remain of it.

The Grail legend also reports that Joseph of Arimathea stuck his walking stick into the earth when he arrived at Glastonbury. This sprout and a thorn bush grew out of it. For centuries it is said to have blossomed in the small church twice a year, at Christmas and Easter . Traditionally, the Glastonbury Thorn is considered to be the thorn bush that grew out of the staff of St. Joseph of Arimathea. The fact that the bush blooms twice a year is very unusual for hawthorn bushes.

According to another legend, Joseph buried the Grail at the foot of Glastonbury Tor . At this point the ferruginous source Chalice Well ("source of the chalice") was then created; the reddish color of the water is associated with the blood of Christ. In numerous legends as the Holy Grail, the chalice was the object of search for many knights . In one of these traditions, Galahad is privileged to see the grail which St. Joseph of Arimathea presented to him in an apparition.

According to tradition, the tomb of St. Joseph of Arimathäa in Jerusalem in the western apse of the rotunda of the Church of the Holy Sepulcher .

Josef's sister, Veronica, mulier Veronica was the mother of the Fisher King after Robert de Boron .

The Descent from the Cross, of which the Gospels report only very briefly, has been taken up again and again within the visual arts . The early medieval book illumination already has many examples. These representations often show how the nails with which Christ was nailed to the cross have already been removed and he sinks down into the arms of Joseph of Arimathia, who is catching him. These representations often show a three-figure composition consisting of Christ, Joseph of Arimathia and Nicodemus . Byzantine panels also show Mary and the apostle John during this scene. One of the most impressive depictions of a Descent from the Cross is that of Rogier van der Weyden from around 1435. On this central part of a triptych , the Descent from the Cross shows the bearded Joseph of Arimathia holding the body of Christ in a white cloth.

Zefirelli's film Jesus of Nazareth is based on the biblical role of Joseph of Arimathaea. In the films The Gathering and The Da Vinci Code, reference is made to the legend of Joseph of Arimathea's establishment of the first church in England. In Mel Gibson's film The Passion of the Christ , Joseph of Arimathäa acts as an intercessor for Jesus Christ in the Sanhedrin . Josef von Arimathäa is also mentioned as the first owner of the Grail in the film Indiana Jones and the Last Crusade , as well as in the Monty Python film The Knights of the Coconut .

In the short story “The Master” by Oscar Wilde, Joseph of Arimäthäa encounters a young man who did the same works as Jesus and who now suffers from not being crucified like him.