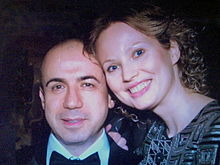 Juri Milner with his wife Julia

Juri Borissowitsch Milner ( Russian Юрий Борисович Мильнер ; born November 11, 1961 in Moscow ) is a Russian entrepreneur and manager of Jewish descent who lives in Moscow and in the state of California in the USA. In 2012, the financial magazine Bloomberg Markets named him one of the 50 most influential people in the world.

Milner was born on November 11, 1961 in Moscow, the son of an economist and a laboratory assistant. In 1985 he graduated from Lomonosov University with a degree in physics . He then worked for the Lebedew Institute in the field of theoretical physics , under the direction of the later Nobel Prize winner Vitali Ginsburg . During this time he started selling computers. In 1990 Milner moved to the United States. He studied there at the Wharton School , but left it without a degree. From 1992 to 1995, Juri Milner worked for the World Bank in Washington, where he worked as an expert on the development of the Russian banking system. He then went back to Moscow, where he became General Director of the "Alliance-Menatep" company in 1995 and, at the end of 1996, was promoted to Vice-President and Head of the Investment Department of the Menatep Bank founded by the Russian oligarch Mikhail Khodorkovsky . Khodorkovsky had given up the chairmanship of the board of the Bank Menatep in April 1996 to change to the leadership of Yukos . From February 1997 to December 2000, Milner was Deputy Chairman of the Moscow Bank, which was one of the ten largest Russian banks until the 1998 crisis, but lost its banking license in May 1999 and was declared bankrupt in September 1999 .

Yuri Milner then turned to the internet business and made a name for himself as an internet investor by investing in several projects in both Russia and the United States. The most outstanding examples of this are the Mail.ru Group in Russia and Facebook and Twitter in the USA. In 2008 Milner was able to win the Russian billionaire and oligarch Alisher Usmanov for a stake in mail.ru. The dominant company attracted around 70% of the data traffic in the Russian area of ​​the Internet in 2011. In 2009, Milner was invited by Mark Zuckerberg to invest on Facebook. The two subsequently developed a friendly relationship. Milner acquired an initial two percent stake in Facebook for $ 200 million. At the end of 2017, however, Milner announced that his management company DST Global had sold all of its shares in both Facebook and Twitter in 2014.

In November 2017, Milner was listed in the Paradise Papers publications . At the same time, the New York Times alleged that his investments in Facebook and Twitter were supported by the Kremlin, which Milner dismissed as "far-fetched". At the same time, he pointed out that he made his investment in Facebook in May 2009, at a time when Hillary Clinton was traveling to Moscow to "press the reset button" in relations between Moscow and Washington. Milner's Facebook participation together with Alisher Usmanov was nine percent at the top. Regarding the other allegations of the NYT, he announced that his contact with Jared Kushner in 2015 was purely business-related. In addition, he complained about climate change in the USA. While his Russian citizenship did not matter until 2016, it is now enough to be Russian to automatically come under suspicion.

In 2013, Milner, together with Mark Zuckerberg and others, launched the Breakthrough Prize , which, in imitation of the Nobel Prize concept, rewards scientists for outstanding achievements with high prizes in various categories. In 2015, Juri Milner started the Breakthrough Initiative together with his wife , which also includes the Breakthrough Listen project he financed . In April 2016, Milner and Stephen Hawking presented the Breakthrough Starshot research and development project , for which he made $ 100 million available. The aim of the project is to develop a concept with which nanosatellites can be sent for research purposes into the star system Alpha Centauri , which is neighboring the earth .

In 2011, Milner garnered international attention when he acquired a 7-acre site in Los Altos Hills , Silicon Valley, a French chateau-style mansion with 2,370 square meters of living space in the main building for more than $ 100 million. The purchase price is said to be among the highest that has ever been paid for a single family home in the USA.

He has been married to the Russian ex- model Julia Bochkova since 2004 , who also tries her hand at painting and photography. The marriage had two children. Milner visits the synagogue regularly, but otherwise describes his religiosity as "very limited".