Adlerflycht's great-grandfather Christopher Björkman came to Frankfurt am Main in 1689 as the Swedish ambassador and governor of the Duchy of Zweibrücken in the 17th century and was ennobled in 1691 with the family name Adlerflycht . Justinian von Adlerflycht's parents were Johann Christoph von Adlerflycht and Susanna Maria geb. from Günderrode. Since 1755, the family was among the ganerbschaft Old Limpurg on.

Adlerflycht studied law in Leipzig . He married the painter Elisabeth von Riese in 1797 and became an electoral Hessian envoy to the Kurhine and Upper Rhine districts , but lost this post due to the French invasion and the repeal of the imperial constitution in 1806. In 1808 he joined the Upper Appellation Tribunal of the Grand Duchy of Frankfurt .

After the restoration of the Free City of Frankfurt , he became a senator from 1816 to 1819 , and from 1819 until his death as a lay judge. From 1821 to 1829 he was also a member of the Legislative Assembly of Frankfurt with interruptions .

From 1824 to 1832 (posthumously) the five volumes of his most important work, “The private law of the free city of Frankfurt presented in a systematic order” , appeared one after the other . The first four volumes, published during Adlerflycht's lifetime, describe personal and property law based on Roman law , the fifth volume, which was completed a few days before his death, deals with the law of civil procedure in Frankfurt . Adlerflycht's work remained the standard work on the legal history of Frankfurt am Main until the end of the Free City in 1866.

In his hometown a street and a square in the Nordend district , between Oeder Weg and Eckenheimer Landstraße , bear the name of his family.

From 1876 to 1932 there was still the Adlerflychtschule, a higher secondary school with a preschool. His grave is in the Frankfurt main cemetery .

There are no known portraits of Adlerflycht. With his brother Carl Friedrich Christian von Adlerflycht († 1835) the male line of the family went extinct.

Adlerflycht's daughter Luise married Conrad Christoph von Thienen. In order for the name of Adlerflycht to continue to exist, they were given the name Thienen-Adlerflycht . 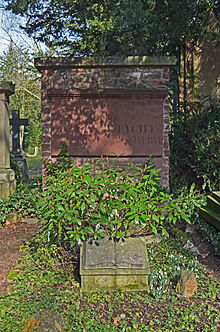 Grave in the main cemetery in Frankfurt am Main