Former Augustinian monastery as the Royal Württemberg gun factory in 1824

The Königlich Württembergische Gewehrfabrik was a rifle factory of the Kingdom of Württemberg in the former Augustinian monastery in Oberndorf am Neckar , which existed from 1811 to 1874 .

As a result of the Napoleonic Wars and the subsequent peace treaties, numerous monasteries in the German states were secularized and given to the princes as compensation for ceded areas on the left bank of the Rhine. In 1806 the new Kingdom of Württemberg took over a total of 95 monasteries and ecclesiastical possessions from the Roman imperial church , including the Augustinian monastery in Oberndorf am Neckar.

As early as 1805, the Treaty of Pressburg , which was disappointing for the last Emperor of the Holy Roman Empire of the German Nation , Franz II. , Gave the then Upper Austrian village of Oberndorf to Württemberg.

In the city triangle of Sulz am Neckar , Schramberg and Villingen , after secularization and the abolition of the monasteries, bitter poverty prevailed and there was hardly any pre-industrial trade.

From the monastery to the royal rifle factory 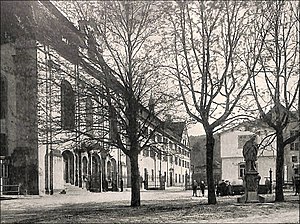 View of the rifle factory (center) in Oberndorf, on the opposite bank - the Mauser factory owner's villa (light-colored building)

The Kingdom of Württemberg had with the state ironworks Christophstal near Freudenstadt in the Black Forest various forging facilities and a drill mill that was suitable for the manufacture of weapons. Individual parts such as ramrods , bayonets , rifle locks and barrels could be manufactured there and were transported to Ludwigsburg , the headquarters of the Württemberg military , processed in the arsenal there and assembled into rifles. The State Councilor and Colonel of the Army of the Kingdom of Württemberg, brother of Justinus Kerner and advisor to the King, Karl Friedrich von Kerner , recommended that the government bundle production and move it to the premises of the former Augustinian monastery in Oberndorf. The rifle factory raised the entire level of craftsmanship in the region. The monastery has served as a barracks for several years. From 1811 the monastery buildings were converted into a rifle factory with living quarters. The rifle factory was set up in the convent building and the monastery church was used as a coal and material store. For this purpose a ceiling was put in halfway up. A Protestant prayer room was set up in one of the parts of the church. In 1814 the tower of the church was demolished. The Neckar , which was fed into the factory in a canal , drove water wheels , which in turn drove bellows and forging hammers . Barrels for flintlock rifles and pistols, bayonets, lance tips, spurs, battle axes, sabers, ramrods and ball pullers were made on such hammers.

The invention of fiery mercury and thus of the primer led to the percussion weapons, which were manufactured in the factory from 1828 to 1866 and also sold abroad.

The cumbersome loading of these rifles, which the shooter could only do while standing, urgently required a breech loader . The royal Directorate opted since 1866 for since 1842. in the army of King of Prussia introduced needle gun .

The beginnings of Mauser

Wilhelm and Paul Mauser, who had been in service at the Royal Rifle Factory from the age of 14, recognized the defects in the needle gun and tried to rectify them. In addition to the construction of a breech-loading cannon, they succeeded in the years 1865–1869 with the Mauser-Norris rifle, a significant improvement in the cylinder lock developed by Dreyse . On the basis of this rifle they designed the first rifle with self-cocking and wing safety, the M 71 , which was introduced on February 23, 1872 as the first German Reich rifle .

In 1872, the brothers built Mauser in Oberndorf aN their own gun factory named Mauser and bought in 1874 the Royal Wuerttemberg gun factory, which suffered due to this competition and peace to lack of orders. The royal rifle factory was incorporated into the Mauser works.