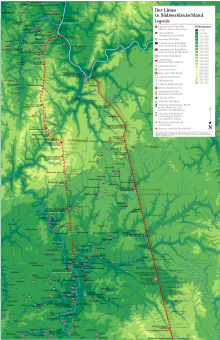 The Fort Mainhardt is a Roman cohort fort of the principate on the "Vorderen Limes", a section of the UNESCO World Heritage Site " Upper Germanic-Raetian Limes " in the area of ​​today's municipality of Mainhardt in the Schwäbisch Hall district , Baden-Württemberg . The few parts of the facility that are still visible and not built over in the area of ​​the local school are freely accessible. Finds can be viewed in the Roman Museum on site.

The castle is located on the enclosed on three sides by valleys gently sloping to the north grounds back of Riedel , around 470 meters above sea level. The square afforded a clear view to the east against the border wall, 320 to 350 meters from the fort front, but also to the west and north. There were connecting routes to the forts in Öhringen and the Murrhardt fort . The connection to the hinterland was ensured by a road to the former location of the cohort in Walheim am Neckar . The location was not particularly favorable to settlement. The location is not far from today's town center and is partially built over. The east side, which is no longer visible, runs roughly along the main road, the foundations of the south-west corner are conserved and are in the area of ​​a school site.

Research into the fort began as early as the 18th century by Christian Ernst Hanßelmann , a royal Hohenlohe councilor who lived in Öhringen . At the time of Hanßelmann, it was still handed down that the walls and ramparts around what was then Römerschanzen. The condition was still so good that he was able to draw a correct outline drawing without digging. The fence stood 4 to 4.5 feet upright, and the double wall was still clearly visible on the west side. He presented his findings in his work about the Limes, published in 1768. When Mainhardt citizens broke stones from the western enclosure wall in order to reuse them for building houses, Justinus Kerner tried to rescue them and, by notifying the statistical-topographical bureau in Stuttgart suggest that an investigation be carried out, although it was not extensive. In October 1879 an excavation was carried out by the Württemberg state curator Eduard Paulus . The two flanks and the back were determined, the porta dextra and the porta decumana were also examined, as well as parts of the Principia (then regarded as the Praetorium ) with the flag shrine . The Reichs-Limeskommission expanded the knowledge gained at that time through excavations in 1893 under the direction of the responsible route commissioner Adolf Mettler . Mettler's studies, published for the first time in 1909, were primarily concerned with the surrounding wall, the gates and intermediate towers. Only the western part of the interior of the Principia was examined by means of narrow excavation cuts.

Floor plan and details of the fort in Mainhardt 1893

The fort was erected in connection with the transfer of the older Odenwald-Neckar line to the front Limes line, which must have taken place around 159/160 AD. The relocation of the cohorts to the new advanced fort site must have taken place around 160 AD. The previous fort was the Walheim am Neckar fort . That is where the unit proven in Mainhardt, the Cohors I Asturum equitata (first partially mounted cohort of Asturians ), was originally stationed. The Limes section from Walldürn to Haghof, where the fort is located, runs straight through the landscape and takes no account of the terrain. Similar to other Limes locations, the larger cohort fort was preceded by a smaller fort, the small fort Mainhardt-Ost , with the function of direct border security.

When the fortifications in the west, which had been well preserved until then, were demolished during the first half of the 19th century, there was an inscription from the Legio XXII Primigenia stationed in Mainz , which was accordingly involved in the construction work. This fact can also be attested to at the neighboring forts. During the excavation of an intermediate tower in 2000, a row of palisades made of solid wooden posts was found in the berm between the trenches , possibly an indication of a predecessor fort built in wood. The enclosure also included two pointed trenches about seven meters wide, which were dug about one meter in front of the surrounding wall.

The four castle gates were flanked by two protruding towers each. Only the exit gate in the east, the Porta praetoria, had two passages. The fence was made of stone made of two-shell , about 1.25 meters thick cast masonry . As the excavations showed, the walls consisted of poor quality house sandstone . The outer wall shell, made of rough cut stone blocks, was originally plastered white, while the inner wall shell consisted of alternating layers and herringbone masonry ( Opus spicatum technique). The fence also included corner and intermediate towers. The intermediate towers protruded by a row of stones to the outside beyond the wall, on their back were door openings. In addition, the stone wall was lined with an earth wall on the inside.

The interior development has at least two construction phases. Different sill beams and post positions could be proven, even if a floor plan is missing. Five large ovens with carefully placed sandstone slabs were found in the foot of the defensive wall. These stoves were originally protected by wooden roofs, as evidenced by traces of the wooden structures. The ovens, about 1.50 to 1.80 meters in diameter, were located along the Via sagularis (Lagerrandstrasse). The usual flatbread may have been made here. They differed considerably from the smaller hearths in the crew barracks. It was here that this type of oven was detected for the first time in the southern Upper German Limes.

Inscriptions on consecration stones and a grave inscription show that, according to Mainhardt, a partially mounted border guard , the Cohors I Asturum equitata , with a strength of about 500 men was detached. This troop was stationed in Walheim am Neckar before it was moved forward from the Neckar Limes to the younger Limes line. As evidenced by the name of the unit, it was originally recruited from the above-mentioned tribe in the northwest of the Iberian Peninsula. At the time of barracking in Mainhardt, it was probably made up of recruits from the surrounding area or from more distant parts of the empire. Troops from Gaul and Dalmatia are evidenced by written documents . Presumably the department was transferred to Great Britain under Emperor Septimius Severus , where it has been attested since the middle of the 3rd century. It is not known which association was stationed in Mainhardt after the departure of the Asturian cohort.

Somewhat apart between the fort and the Limes there was probably a place of worship at the parade ground, possibly in connection with a nearby spring horizon. Between 1944 and 1950 nine Jupiter consecration stones were recovered. These altars made of loose parlor sandstone were not erected by individuals, but by the troops. As Dietwulf Baatz thinks, these were set up every year in a solemn act on the return of the anniversary of the emperor's accession or on New Year's Day. From time to time space had to be made for new altars, and so the oldest altars were carefully buried at the later sites. Three matron reliefs also discovered there reveal a strong Celtic-Germanic influence in the worship of gods, as well as an altar with the depiction of a three-horned bull, discovered in 2000 in the outer moat of the fort, which often appears in the Gallo-Roman context and, for example, from the fort Köngen is known.

The camp village ( vicus ) was located southwest of the fort in the Steinbühl corridor. During the construction of the new sports field and the school building in the second half of the 20th century, a total of ten cellars belonging to the camp village were excavated. Everything points to the development with long, narrow striped houses that was characteristic of the former camp villages , which were probably located here in a radial pattern along a ring road that led south around the fort. During a rescue excavation in 1987, among other things, a 7.40 meter wide wooden building in a sill beam construction over a length of 14 m could be traced. A well in the camp village was examined in 1979. The small altar discovered in 2000, which shows a person in a hooded cloak on the front, probably holding a sacrificial bowl, and next to it a three-horned bull, seems to prove Gallic influences. In 1967 a consecration stone from AD 181 was discovered, which proves the presence of beneficiaries . Hanßelmann reported grave finds in 1630, but details are not known. The location of the fort bath is also unknown.

In 1979 the backfilling of a well in the former camp village could be examined in more detail. Based on the evidence, the following crops could be identified: as grain, spelled, emmer, barley and millet, as a spice, oil fruit or medicine, the opium poppy, as well as walnuts and figs. Hazelnuts, raspberries and blackberries, wild strawberries, apples and beechnuts were found on collector plants. Based on the composition of the weeds, it could be postulated that farm meadows or pastures must have existed. In the manure part of the well filling, however, no cattle manure could be detected, so that the grazing was probably done by horses, goats and sheep. Based on the wood components, it became clear that in the area of ​​Mainhardt in Roman times there must have been a mixed forest of beech and oak, with only a small proportion of fir and numerous other deciduous trees.

Information board for the Roman Museum Mainhardt

Some interesting inscription stones and finds are exhibited in the local Roman museum. It has been located in the Catholic Maria Krönung Chapel since 1987, which was built in 1782 by the Counts of Hohenlohe-Bartenstein and was used for worship in the Catholic parish until 1963. In 1977 the chapel became the property of the municipality. It is located in the area of ​​the former main gate of the fort, the Porta praetoria , which was located at the location of today's castle courtyard. The exhibits include the above-mentioned consecration altars for Jupiter Optimus Maximus, but also numerous other finds that document the time of the Roman occupation in Mainhardt. Since 2004, the facility has been redesigned and divided into subject areas. The regular opening times are limited to Sundays and public holidays for a few months of the year. However, the key to the chapel can be borrowed from a nearby shop on working days.

The ground monument is protected as a registered cultural monument within the meaning of the Monument Protection Act of the State of Baden-Württemberg (DSchG) . Research and targeted collection of finds are subject to approval. Incidental finds are to be reported to the monument authorities.