Aerial view of Cologne-Klettenberg from a south-east perspective. In the background the Cologne Cathedral

Play media file
Flight from east to west to Klettenbergpark

The Klettenberg district is located in the southwest of the city of Cologne and is politically assigned to the Lindenthal district .

Klettenberg borders the Zollstock district in the east, Hürth - Efferen in the south and Sülz in the west and north . Klettenberg has grown together with Sülz due to a large number of jointly used facilities such as schools, churches and shopping streets.

As with the neighboring Sülz district, the name Klettenberg is derived from a Fronhof. The Klettenberg estate , which was first mentioned in 1225 and belonged to the Benedictine Abbey of St. Pantaleon , which was founded in 957 , had to give way at the beginning of the 20th century when the development of the Klettenberg district began. Planned on the drawing board by the City Planning Council Control Nail as a “flight line plan Siebengebirgsallee”, Klettenberg was built as an extension to Sülz “from a single source”.

Previously there were sand and gravel pits in this area, mainly built in the 19th century, and another Fronhof in the western area, the Komarhof in Geisbergstraße (formerly Guilleaumestraße), which was first held in 1348 as a fief of the St. Maria im Kapitol Monastery mentioned.

The Hofgut Klettenberg was one of the popular excursion destinations for Cologne residents in the 19th century with the two ponds created on the site, one of which was open for boat trips. As a replacement, at the beginning of the construction work on the western edge of Klettenberg, the Klettenbergpark was created according to plans by Fritz Encke .

At the beginning of 1898, shortly after the incorporation in 1888, the foothill railway of the Cologne-Bonn Railways was opened, which replaced the previous horse-drawn railway line to Sülz and Klettenberg. The train was pulled by a steam locomotive popularly dubbed “Fiery Elias”.

The Sülz area - to distinguish the Sülz industry in postal and advertising traffic with the addition "am Klettenberg" - was home to the Cito bicycle works, which later merged with the Allright bicycle works on Neuenhöfer Allee to form the Cologne-Lindenthaler metal works . The site on Luxemburger Straße, on which Mercedes-Benz was later located until 2006 , was built on with a residential complex from 2007. The Hermann bread factory in Sülzer Wichterichstrasse extended to Luxemburger Strasse.

The Siebengebirgsallee starts at the intersection of Luxemburger Strasse and Gottesweg and runs diagonally south-east through the district that was laid out at the beginning of the 20th century. After an arch, it splits into Stenzelbergstraße, which runs further south, and runs westward in a semicircle until it joins Luxemburger Straße again directly behind Klettenbergpark. Due to this curvature, almost all other streets in Klettenberg cross the Siebengebirgsallee or flow into it.

To the north, Klettenberg is bounded by Gottesweg, to the east in the direction of Zollstock by Rhöndorfer Strasse, which runs along the embankment, and to the west and south by the corresponding parts of the motorway ring and Luxemburger Strasse. The Duffesbach , which was diverted from Sülz to Klettenberg and used to irrigate the pond in Klettenbergpark, runs under Luxemburger Straße .

Rhöndorfer and Luxemburger Straße and in the middle Petersbergstraße run lengthways through the district, with Luxemburger Straße forming the actual traffic arterial road on which the tram (line 18) used jointly with the Sülzers also runs and which has a connection point to the A4 motorway.

The larger cross-connections are the Gottesweg belonging to Sülz, which, like the Klettenberg belt, leads under railway underpasses to Zollstock. Further west is Geisbergstrasse with Komarhof and the corresponding part of the military ring running along the upper edge of the green belt, which offers a motorway connection to Bonn via the Bonn distributor. The four-lane Klettenberg belt has a green central reservation where a weekly market is held on Wednesdays and Saturdays.

Honnefer Platz at the intersection of Königswinterstrasse / Hirschbergstrasse / Heisterbachstrasse is named after the town of Bad Honnef near Bonn . After its redesign, you will find a football field and a brand new children's playground here. A quiet zone based on the Fritz Encke model, as can be found on most Sülzer squares, is missing.

The rose garden in Klettenbergpark

Directly on the embankment along Rhöndorfer Straße there is a narrow strip of allotment gardens belonging to the railway, which extend from Geisbergstraße over a large part of the site to the military ring and Luxemburger Straße. Beyond the military ring there are forests, meadows and two sports fields.

The 6 hectare Klettenbergpark in the Schenkel between Siebengebirgsallee, Nassestraße and Luxemburger Straße, laid out by Fritz Encke from 1905 to 1907, was laid out as a height and nature park on a 10 m deep gravel pit. In the middle of it is the 0.9 hectare pond with typical bank vegetation, which was formerly from the diverted Duffesbach and now irrigated with tap water, a flower meadow with rock stream sections and waterfall, a heathland and a network of circular trails.

Solar cells on the pond operate a pump that keeps the pond water in motion and returns it to the pond through a zone with a fine gravel filter substrate enriched with oxygen.

In the eastern area, where Petersbergstraße joins Nassestraße, you can find the ornamental gardens with small ornaments typical of the Wilhelminian era, as well as a rose park with arcades and a viewing terrace. In particular, the basalt quarry with information board makes clear the didactic demands of the entire facility, which should serve for quiet relaxation and walking, but also for education and instruction. A previously existing restoration in the western area is no longer managed.

The following table shows the last Klettenberg election results (in brackets the results for the entire Lindenthal district):

Since the 2013 federal election, Klettenberg and the entire Lindenthal district have been represented in the Bundestag by Heribert Hirte (CDU), and in the Landtag by Lisa Steinmann (SPD). In local politics, the predominantly red-green district of Klettenberg is represented in the Cologne City Council by Gabriele Schlitt (Greens).

Above the Klettenbergpark (2019)
Display as a spherical panorama

Show as spherical panorama 100 meters above the Klettenberg
belt

Show as spherical panorama 200 meters above the Klettenberg
belt

Show as spherical panorama 300 meters above the Klettenberg
belt 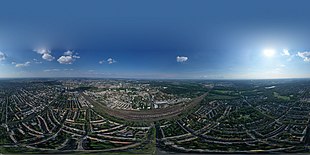 400 meters above the Klettenberg belt Show
as a spherical panorama

Cologne districts in the Lindenthal district