The former prison area today. In the background the Cologne Tower in the Mediapark ( Neustadt-Nord )

Klingelpütz is a 473 meter long street in the north of Cologne's old town between Gereon and Vogteistraße near the Hansaring . In the vernacular of Cologne , the street name - the location of the old prison built by the Kingdom of Prussia in the 1830s - is mostly used as a synonym for the Cologne prison about 6 km away on Rochusstraße in the Ossendorf district .

After completion of the Ossendorf prison, the 130-year-old prison at Klingelpütz was demolished in 1969; The Klingelpützpark is now located on its former site .

History of origin and name

The Clingelmann family owned the area in the 13th century, and there were several wells on their property . Brunnen is called in Kölsch Pütz (from Latin puteus or French puits, “fountain”, “shaft”), see also Low German / Ruhr German Pütt . In 1263 the shrine books mentioned a Clingilmanshus here , from 1280 its Latinized form was called inter herdium Clingilmanni , 1349 apud Clingilmansputzen , 1369 luxia Clingilmans pucum , 1451 Klyngelputze. In the colloquial language of Cologne there was talk of "dä Klingelmannspöötz", later transformed into Klingelpütz and officially introduced as a street name. The official street name has been documented since 1263.

In 1426, surrounded by large gardens was here Augustine - monastery Lord's body founded, previously was located at the same place a place of pilgrimage, their buildings and chapel on used and rebuilt in the sequence and have been extended. The convent had acquired the property in 1426 and in 1454 additional areas for structural expansion. A total of 7 deep wells supplied the monastery and the neighboring population with fresh water. Under French occupation , the monastery complex served as a hospital for French prisoners of war from 1793 and was demolished in 1805. The gardener Matthias Bilstein was the buyer of the now free property.

Establishment of the prison 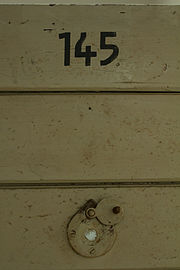 Detail of a cell door in the Klingelpütz, depot inventory of the Cologne City Museum 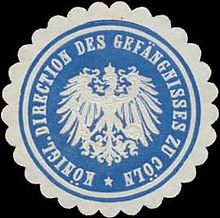 Seal mark Königl. Direction of the prison in Cologne

On June 28, 1833, the Klingelpütz 21 property with an area of ​​26,267 m² became the property of the Kingdom of Prussia through a purchase agreement with the city of Cologne . According to a design by the Cologne government architect Matthias Biercher, the first new prison in the Prussian Rhine Province was built on May 29, 1835 . The handover protocol of the “Arrest- und Correctionshaus am Klingelpütz zu Cöln” dates from October 15, 1838. The three-story brick building for 300 “forced labor offenders” and 500 “correctionaires” (prisoners) had a fully developed cellar and two prison walls. The inner wall was 5.02 meters high, the outer wall 6.28 meters high. The central building was designed in the shape of an octagon . As early as 1841, the prison was too small, so that emergency prisons had to be set up in the Bayenturm and Severinstorburg . As of March 1843, the expansion was at the south wing, also Isolierhaftflügel called single cells for 180 people, which was completed 1845th
A famous inmate was Cardinal Paulus Melchers in 1874 .

Executions and the Nazi era

For the purpose of his execution , the serial killer Peter Kürten was housed in the Klingelpütz the evening and the night before his death; he was executed here on July 2, 1931 because the Düsseldorf prison did not have a courtyard that was not visible from the outside. A comparable practice was continued during the Nazi dictatorship , because the prison served as the central place of execution for the special courts of the Rhineland . Executions for those sentenced to death by the People's Court and Reichsgericht also took place in Klingelpütz prison , and it is estimated that over 1,000 people were executed there with the guillotine or, in individual cases, with the hand ax . In this way, the brutal public execution of six young Red Front fighters took place on November 30, 1933 , during which horrific scenes took place. The defendants were charged with murdering two members of the SA .

One of the wings of the prison, which was overcrowded during the Nazi era, was reserved for use by the Gestapo from 1944 . In the same year, a bomb hit worsened the already cramped prison conditions. In 1944 alone, over 10,000 prisoners were housed here. On January 15, 1945 the order came to transport 330 prisoners from the Klingelpütz to the Buchenwald concentration camp . On October 30, 1945, 80 bodies of political prisoners were unearthed in the prison yard. They were killed or strangled when they were supposed to be transported to the Buchenwald concentration camp on January 15, 1945.

There were originally seven wells on the prison area, the last of which was backfilled in 1951. Between 1960 and 1969, 27 prisoners fled the outdated Klingelpütz. In 1965 a journalist discovered after research that prison staff had committed numerous physical assaults on prisoners (" Klingelpütz Affair "). The service and technical supervision was then strengthened by planning special penal offices (in Cologne and Hamm) as intermediate authorities and putting them into operation at the beginning of the 1970s. On June 4, 1969, the old Klingelpütz was blown up; the new Ossendorf prison was already in operation at that time.

"The stumbling block". Think – time from inside to outside, sculpture project of the scale e. V. (Summer 2000 in Cologne prison, Olaf B.)

The laying of the foundation stone for the new prison in Cologne-Ossendorf was on November 3rd, 1961. The transfer of the prisoners to Ossendorf began with a partial occupation in November 1968, the rest followed after completion in May 1969. The new prison has 863 places for men and 271 Cell places for women. Well-known inmates here were the terrorists Ulrike Meinhof and Andreas Baader , spy Günter Guillaume and banker Iwan David Herstatt . Although this new prison is officially called "JVA Köln" , the name Klingelpütz has been retained for it.

Development of the former site

In today's Klingelpützpark there is a youth center and a playground. In memory of the Klingelpütz prison as a National Socialist execution site, there is a memorial stone designed by Hans Karl Burgeff , which was presented to the public on September 1, 1979 on the 40th anniversary of the start of the war in 1939 . It bears the inscription "Between 1933–1945, over a thousand people innocently sentenced to death by the National Socialist arbitrary justice system were executed here."