The human body adapts to the load it demands through adaptation. A distinction is made between acute (short-term) stress, in which "the functioning of the biological systems" adapts, and chronic (permanent) stress, through which the "appearance of the biological systems" (see also morphology ) changes. The aim of strength training is to stress the body in order to achieve morphological changes in the circulatory and central nervous system as well as in the musculoskeletal system (bones, tendons and muscles) and thus to increase the body's ability to develop strength.

Requirements for the effectiveness of strength training

The extent of the physical changes that can be achieved through strength training also depends on genetic factors. During and immediately after training, the body must have sufficient water, protein and iron for the metabolism, as well as vitamins and minerals for metabolic regulation. At the same time, the load required by the body ("training stimulus") must be sufficiently large (see also training principle ).

Adaptations of the physical systems to the training

The adaptation of the body to the training load takes place in this order:

Although the adjustments described take place in the order mentioned, they usually flow into one another. Other parts of the musculoskeletal system, such as tendons and bones, adapt very slowly to the load. Joint structures can be damaged by overuse or underuse. However, training that is carried out correctly over the long term can lead to positive adaptation reactions in the form that e.g. B. the hyaline cartilage, which covers the sliding surfaces of a joint, becomes more resistant and thus more resilient by widening the contact surfaces and increasing elasticity by means of optimal water retention capacity. During training (as with any other physical strain), special attention must therefore be paid to stressing the body in the correct or individually optimal way in order to avoid (cartilage, bone, ligament) injuries and chronic damage (e .g Osteoarthritis) on the joints.

A training stimulus is a stress on the physical systems. The body reacts to this stimulus by repairing the damaged muscle and connective tissue structures and replenishing its energy stores after training. In order to be able to deal with this high level of stress more safely and economically next time, the body overcompensates the degree of degradation by building up beyond the initial value (called supercompensation ). The resulting increased performance remains for a few days.

If a new training stimulus is set in this phase of increased performance, the cycle of degeneration, regeneration and subsequent supercompensation starts again. Through repetition, the power output is progressively increased. However, this system of increasing performance comes up against individual limits. As the training status progresses, greater and greater training stimuli must be set so that the same performance gains can be achieved. In order to increase the individual adaptive capacity, some athletes resort to doping substances. This allows the described cycle of overload, compensation and hypercompensation to be continued or accelerated somewhat. However, doping substances can lead to considerable side effects (damage to the heart muscle, gynecomastia , cancer ). See also doping in bodybuilding .

It cannot be influenced in which parts of the body the body reduces fat. Where and when the body metabolizes fat is solely influenced by genetic disposition.

The myth persists that the fat metabolism only sets in a certain time (often referred to as 20–40 minutes) after the start of training, and only when training is carried out at moderate intensity. In fact, however, the metabolism of fat takes place permanently and at all times in the body. Since it runs relatively slowly, other energy sources must also be tapped in order to achieve high performance . The misunderstanding arises from the fact that only fat is burned only when these energy sources are exhausted. The reverse conclusion, namely how training has to be structured in order to achieve weight reduction through increased fat loss, cannot be derived from this consideration.

As a rule, the execution takes place in exercises (i.e. movement sequences under load), which set a training stimulus for certain muscle groups. Depending on the number of muscles and joints used, a distinction is made between basic exercises and isolation exercises.

Basic exercises use larger parts of the whole body and several joints move when they are performed. A classic example of such an exercise is the squat .

A workout that uses the whole body can be put together relatively easily with basic exercises. Example: 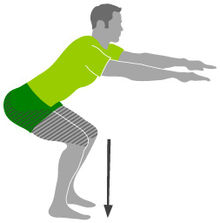 The squat, a basic exercise

This composition is only an example, other compositions are possible. Nevertheless, the whole range of possible movements is covered with it (upper body and lower body, pulling and pushing, in every possible direction) and the whole body is stressed.

The following important information is missing from this section:
Either a few parts of the body are missing or an explanation as to why legs cannot be trained / trained in isolation
Help Wikipedia by researching and pasting it .

Isolation exercises usually only use a single muscle or muscle group and their synergists . Typically, only a single joint moves during such an exercise.

When designing the training, it must be decided

It is a question of goal setting whether to focus on isolation exercises or rather on basic exercises (multi-joint exercises). Only with basic exercises is it guaranteed that the strain on metabolism and circulation is high enough to cause the body to overcompensate. A phenomenon that is often observed is that people who train with isolation exercises do not get beyond a relatively low level of stress in their exercises because they lack the metabolic basis to do so. After switching to full-body exercise, you usually get ahead.

If you want to get stronger, you should focus on basic exercises and consider isolation exercises as complementary exercises or as a measure to prevent injuries. You should choose a weight with which it is possible to complete 1 to 6 repetitions, not going to failure, but instead inserting several sets with appropriate breaks between the sets.

Overloading requires disproportionately long regeneration times and should therefore be avoided. The body needs time until the metabolism has adapted through training to such an extent that it is able to regenerate the consumption caused by greater stress. Those who do not regenerate sufficiently will drain their reserves in the long run. This can lead to the fact that the body refuses to perform better despite training in order to prevent self-harm. This effect is called overtraining and reduces physical performance.

The ideal training frequency depends on the regeneration time and the time required for the subsequent supercompensation . As a rule of thumb, we recommend at least a day's break between training sessions (for a specific muscle group). The length of the rest period depends on the intensity of the exercise and the load on the central nervous system . When a muscle has been completely exhausted, a break of three to four days can certainly be taken. However, no generalizations can be made here; a rest period of one day can also be sufficient.

For beginners, there is a full-body plan that is completed twice a week; Advanced users can also train four to five times a week, in which case it is usually a “ split training ”. Only certain muscle groups are trained in each case. The HIT ( High Intensity Training ) training principle is also suitable for advanced users . With this method, the training frequency is reduced to once or twice a week and the training intensity is increased extremely.

Greeks at the ancient Olympic Games knew about strength training with weights (which were originally intended for long jump training) as early as 200 AD.

Isotonic strength training is a form of strength training in which muscle tension remains constant over the entire range of motion, with isotonicity being a theoretical ideal. In practice, completely ideal isotonic motion is not possible. There are devices whose movement resistance comes very close to an isotonic load, which enables effective training with a very low risk of injury. This is particularly recommended at the beginning of training or in the area of ​​rehab. Above all, isotonic loads strengthen the homogeneity and activation by nerves and thus the resistance to injury of the muscles.

Isometric strength training refers to exercises in which the muscle length remains constant and only the muscle tension, e.g. B. in static exercises, varies. A slight change in length of the muscle cannot be avoided here either. Above all, isometric loads strengthen the static holding power of the muscles. However, purely isometric loads rarely occur in reality. Rather, most movements are characterized by strong changes in tension in the muscle during the movement phase.

Isokinetic training describes a form of training in which the speed of movement remains constant and the resistance to be overcome is adjusted in such a way that a (as) exactly constant movement speed is achieved. This form of training requires technical aids to be carried out. The advantages of isokinetic training are the increase in strength in all degrees of angle and a lower tendency to sore muscles because there are no load peaks in the course of strength. This form of training is disadvantageous as training for sports with acceleration of movement (e.g. athletics), since the sport-specific movement dynamics are not mapped with this training (cf. Weineck, 2004).