Kunowo ( German Kunow a./Straße ) is a village in the Kobylanka municipality in the Polish West Pomeranian Voivodeship .

Kunowo is located in Western Pomerania , about seven kilometers west of the city center of Stargard (Stargard in Pomerania) and 27 kilometers east of Stettin ( Szczecin ) on the east bank of Lake Miedwie ( Madüsee, which is on average 4.5 kilometers wide and 22 kilometers from north to south) ). The neighboring town of Skalin ( Schellin ) in the south is two kilometers away, Grzędzice ( Seefeld ) in the north 4.7 kilometers. 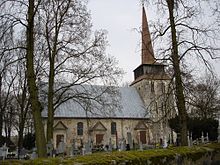 The church village Kunow an der Straße originally received its name affix to distinguish it from the nearby village of Barnimskunow in the Pyritz district . For the same reason it was also called Bischofskunov in the 13th century. Although the village is located on the old military road Pyritz - Stettin , the name addition probably originally referred to the large swamp and forest area that joined the Madüsee to the north and was called Straßne . The first known documentary mention comes from the year 1238. In 1284 a contract with the Margrave of Brandenburg determined that Strasne Castle should be demolished. Instead of Kunow, Cunowe , Conow or Cunow used to be written.

At the beginning of the 1930s, the district of Kunow had an area of ​​16.3 km², and there were a total of 125 houses in six different places of residence in the municipality:

Until 1945, Kunow belonged to the Saatzig district in the Pomeranian province . It was the district of Seefeld, Saarow, Lübow, Bruchhausen and Mulkenthin. As an official village, Kunow a./Straße had its own registry office.

Towards the end of the Second World War , Kunow was occupied by the Soviet Army in early March 1945 . After the war the village became part of Poland as Kunowo.

The village church is a field stone building from the late Middle Ages with a rectangular floor plan. A wooden superstructure is placed on the field stone substructure of the 52-meter-high Gothic church tower, which consists of a clapboard- covered helmet with a slender pointed tower. The interior design of the church, including the interior, dates from the beginning of the 18th century and has gilding.

The nearest train station was in Grzędzice, 4.7 kilometers away.