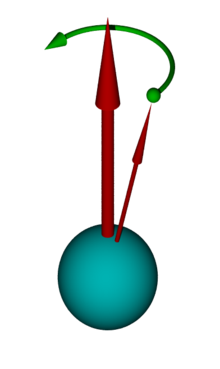 Larmor precession (after the Irish physicist Joseph Larmor ) is the precession of the angular momentum of a particle with a magnetic dipole moment around the direction of an external magnetic field . In the case of atoms , it can be observed in particular through the splitting of spectral lines caused by the magnetic field , the Zeeman effect .

Precession using the example of the heavy top

Precession in a magnetic field

The Larmor precession is based on the fact that every charged particle with angular momentum also represents a magnetic dipole . This also applies to totally neutral particles (e.g. neutrons , neutral atoms with an odd number of electrons), which are composed of charged particles whose magnetic moments do not add up to zero. In a magnetic field a torque acts on the particle , which tends to make the dipole parallel to the field direction. It is . Magnitude and direction of the dipole are given by the angular momentum vector: . Here the gyromagnetic ratio is a constant that can be calculated for each energy level according to the Landé formula, depending on the type of particle. The precession with the Larmor frequency follows from the equation of motion of the top,, . This is proportional to and to the flux density of the magnetic field

or as angular frequency (with the Landé factor , the charge and the mass of the particle)

The above description applies equally to classical and quantum physics. Has one z. For example, if a drop of water is slightly magnetized by a strong magnetic field, the (partially) aligned magnetic moments of the protons ( atomic nuclei of hydrogen ) together form a weak macroscopic dipole magnet, which is connected to a small total angular momentum via the same gyromagnetic factor. If the magnetic field is replaced quickly enough by one in a different direction, this dipole magnet will retain its original orientation for a short time and will perform the Larmor precession. It generates an easily observable induced alternating voltage in an antenna coil , the frequency of which is the Larmor frequency. The amplitude of the alternating voltage decreases as the strength of the rotating dipole perpendicular to the field direction decreases because the macroscopic magnetization adapts to the new field direction (longitudinal relaxation ) and because the individual protons get out of step due to small disturbances (transverse relaxation). Both the precise measurement of the frequency and the observation of the relaxation are among the most important tools in materials research when researching structures and reactions. In geophysics, this procedure is used in the proton magnetometer to precisely measure the earth's magnetic field and its disturbances.

In terms of quantum mechanics, the magnetic moment in the magnetic field splits up the energy level with the angular momentum quantum number into equidistant levels to the various possible magnetic quantum numbers . The level distance is always (therein is the reduced quantum of action ). This splitting was first observed in 1896 on optical spectral lines and was one of the first approaches to studying the processes in atoms and thus to the development of quantum mechanics.

In formulas: The above torque shows that the particle in the magnetic field has additional energy

where is the component of the vector that is too parallel and the field direction was chosen as the z-axis. Since the quantum numbers belong to (see directional quantization ), the level splits into as many Zeeman levels . Your energies are

A rotational movement around the -axis can only be observed in a state that at any given moment characterizes a certain direction perpendicular to the -axis in a measurable way. To do this, it must be a superposition of several Zeeman states. Which axis is marked perpendicular to the axis then depends on the relative phase of its Zeeman components. For example, a particle with spin can have the Zeeman states and , and the state aligned to the -axis is given by the superposition (apart from a common factor, see also properties of spin ). If the phases of the two components have developed 90 ° apart for whatever reason, the state is called (apart from one common factor) and has aligned the spin towards the -axis. After another 90 ° phase difference, the state is called and is aligned, etc.

Since the individual state vectors change with the passage of time, as if they had all been rotated by the same angle around the axis, the same superposition now describes a state that has actually performed this rotation. If at the beginning it showed a polarization that was not parallel to the -axis, then later it shows the same shape and strength of the polarization, but in a correspondingly rotated direction.

In other words: the system described rotates entirely with angular velocity , in complete agreement with the view. Here it becomes clear that the energy splitting of the angular momentum eigenstates as in the Zeeman effect allows such a simple spatial illustration, because it is equidistant. A split proportional to the square of the magnetic quantum number, such as B. through the interaction of the electric quadrupole moment with an inhomogeneous electric field, cannot be interpreted in this way.

The Larmor precession can become noticeable when working with a spin-polarized ion beam if the beam crosses matter - such as a foil or a gas. If an ion traps an electron, the spin vector of this ion then precesses around the (random) direction of the electron's much larger magnetic moment, so that the polarization of the beam is reduced.

In the case of a film behind which there is a vacuum, the captured electron can remain permanently bound; then, after a period of precession, all ion spins have their original directions again, and the polarization has returned to the initial value. If the speed of the ions corresponds to an easily measurable distance per Larmor orbit, a sinusoidal decreasing and increasing polarization can be measured along the beam path. This was clearly demonstrated in an experiment with polarized deuterons of around 160 keV .

By irradiating an alternating magnetic field, transitions between the levels split in the Zeeman effect are stimulated if the frequency of the alternating field matches the Larmor frequency ( resonance ). By varying the frequency, an absorption spectrum with a visible absorption line is created. This method is called electron spin resonance or nuclear magnetic resonance , depending on the object being observed, and allows measurements with extreme accuracy. For example, with nuclear magnetic resonance, the influence of the chemical bond between the atom and its wider environment can be measured because it changes the magnetic field acting on the nucleus by a fraction of a million ( chemical shift ).

This absorption of energy can also be understood macroscopically, because a linearly polarized alternating field contains a circularly polarized component that exerts a constant moment (in its rest system) on the precessing dipole at the correct frequency. If it is heading “as if it wanted to accelerate precession”, energy is supplied to the top. But it cannot store this in the form of a faster precession, because the Larmor frequency is fixed. Instead, the gyroscope absorbs the energy - in the classic vivid way - by increasing the setting angle (away from the constant field ), expressed in quantum mechanics by a correspondingly increasing admixture of Zeeman states with a lower m-quantum number. On a large toy top that precesses in a gravitational field, you can directly observe the classic behavior when you try to accelerate (or slow down) the precession with your finger.