Big City Lights is an American tragic comedy from 1931 by and with Charles Chaplin , which takes up his most famous character, the tramp , once again . For this film, Chaplin produced his own soundtrack for the first time. The premiere took place on January 30, 1931 in Los Angeles.

A big city. The tramp falls in love with a blind flower girl who comes from a poor background. He pretends to be a wealthy man for the girl (initially by accident). It was a lucky coincidence that the tramp stopped an alcoholic millionaire from committing suicide. The latter then names the tramp his best friend, lets him live with him, celebrates parties for him and pushes bundles of bills into his hand. However, this affection only lasts as long as the millionaire is drunk. If he sobered up again, he couldn't remember anything and had his butler regularly put the tramp in front of the door of his villa.

In order to be able to give the girl presents, the tramp accepts a job as a street sweeper. When he learns that her landlord is demanding the outstanding rent and that she could see again through an eye operation in Vienna, he promises to pay for everything: But on that very day he loses his job. He tries his hand at boxing, but is defeated. When he meets the drunken millionaire again that same night, he invites him to his home and gives him the money he needs, all problems seem solved, but two burglars attack the two and knock the millionaire down. The tramp is accused of complicity because his rich friend once again cannot remember him when he is sober. However, he manages to escape and he can hand over the money to the flower girl. While she is traveling to Europe, the tramp is arrested.

Six months later, the now healed flower girl runs her own flower shop and is eagerly waiting for the generous millionaire she loves to appear. The tramp is released from prison and happens to walk past her shop. The girl does not recognize the tramp at first, but treats him kindly despite his shabby appearance and gives him a white rose. Only when she gives him an additional coin does she touch his hand and recognize him, her long-awaited lover. 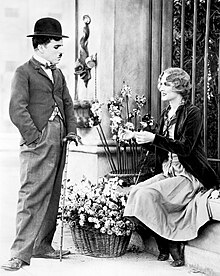 The first encounter between the tramp and the blind flower girl

Chaplin worked on the film from 1928 to 1931. At this time, talkies were already well established: The first sound film was Alan Crosland's musical film The Jazz Singer in 1927 , after which the audience asked for new sound films. Nevertheless, for a long time he resisted the new form of "talking film". He was convinced that language in particular would bring down his pantomime comedy. Chaplin's considerations to somehow transform his tramp into a figure suitable for the sound film did not produce a satisfactory result. With the production of City Lights in the style of a silent film , he committed an anachronism that entailed considerable risk, since the mass of the sound film audience already found silent films to be old-fashioned and unattractive. Other filmmakers had tried unsuccessfully to continue making silent films, but with Chaplin the risk paid off: The film was Chaplin's greatest triumph of his career to date.

The first scene seems like a cheeky parody of a sound film, when the ceremonial speeches are given on the occasion of the unveiling of a monument and only grotesque, croaking caressing can be heard. The squeaking tones are produced by a saxophone . Later in the film, Chaplin also plays with the possibilities of the sound film by making the tramp swallow a whistle that whistles shrilly with every hiccup. He also composed the film music himself for the first time. Until then, his films were accompanied live by a piano player or a small orchestra in the respective cinema, with arrangements of already known pieces of music being used. Chaplin himself could not read notes, he dictated his musical ideas to an experienced musician who also did the fine-tuning. 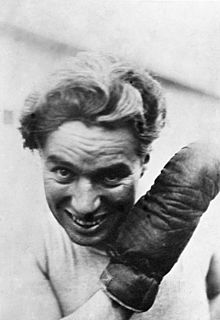 From the beginning of 1928 Chaplin worked together with the American writer and film critic Harry Carr (1877-1936) on the script. The first scene Chaplin had in mind was the ending of all things. At the beginning of his script work he immortalized the final scene in detailed descriptions, because he considered it the most important of the film. During the boxing match, Chaplin picked up his own short film The Champion from 1915 and varied the basic idea so that new jokes were created.

A difficult question for Chaplin was how would the blind girl plausibly think that the tramp was a rich man. The perfectionist Chaplin then withdrew from work for weeks and months brooding over the question. During that time, the film team was ready for the next shot every day, even though Chaplin himself was not in the film studio. Since he financed the film himself, he paid the entire crew for several weeks to do nothing, which was actually very expensive. Eventually he got the idea that the tramp wanted to cross the street, but everything is blocked due to a traffic jam, so the tramp can get into a Rolls-Royce from one side and get out on the other. The girl hears someone getting out of a car and thinks she is a rich man. Chaplin considered this scene of the first encounter between the tramp and the flower girl to be the most important in the film, as it was a believable basis for the rest of the film.

As another main character, Chaplin initially planned a black newspaper boy who should befriend the tramp; however, he rejected the idea and turned to the figure of the drunken millionaire. A drunken millionaire had already appeared in Chaplin's short film The Fine People (1921). Chaplin had long had the story for a short film in his head in which two millionaires pick up the tramp from the street and show him the life of the rich for one night before they drop him off again on the street. The tramp would then not know whether he had only dreamed the encounter or whether it had actually taken place. This basic idea was then further developed into a drunken millionaire who is friends with the tramp when he is drunk, but rejects him soberly.

Chaplin's mother Hannah Chaplin died on August 28, 1928 at the age of 63 in Glendale, California . He interrupted work on the script for several weeks as a result of her death. The psychologist Stephen Weissman stated in his book Chaplin: A Life (2008) the thesis that City Lights is very autobiographical and the flower girl his many years mentally ill mother Hannah represents, while the drunken millionaire his father Charles Chaplin Sr. represents . Chaplin Sr. was an entertainer in the British Music Halls and died in 1901 at the age of 38 from the effects of his alcohol consumption.

Charles Chaplin was notorious for having affairs or relationships with his leading actresses. But he and City Lights leading actress Virginia Cherrill couldn't stand each other. He said she didn't behave professionally enough in her first film role; she said his countless repetitions of scenes - individual scenes over 100 times - were excessive. When she finally wanted to leave the set before filming was over, Chaplin fired her. Instead, he hired Georgia Hale to do screen tests. He had also had a relationship with Hale, with whom he had already shot in the Gold Rush . But in the end he decided not to redo the entire film, which was about to be completed with Cherrill. So he hired her again.

There were also problems for Chaplin when casting the millionaire: he hired his Australian production designer Henry Clive (1883-1960) for the role. However, he refused to jump into the deep end during the millionaire's suicide scene, so the angry Chaplin replaced him with his fellow actor Harry Myers . The formerly popular Myers shared the fate of many other silent film actors and had suffered a career turnaround with the beginning of the sound film. For Myers, the millionaire was his last major role, after which he received only minor parts until his death.

Premiere in Berlin and reactions in Germany until 1945

Photo of the visit to Germany, Reichstag grounds, Berlin , March 1931

In March 1931, Chaplin was enthusiastically received on arrival at the train station in Berlin . He was on a promotional tour for city ​​lights . The crowd upon his arrival was perceived as the biggest crowd the capital saw between the revolutionary days of 1918 and the Nazi torchlight procession on January 30, 1933. At the Friedrichstrasse station , a few dozen Nazis shouted “Down!”, But were drowned out by the cheers for the guest. Chaplin gave interviews with left-wing circles and was heavily absorbed by them. He then denied it and described himself as apolitical. The right-wing press made a sharp front against him. Chaplin thought the Weimar democracy was stable, but nevertheless worried about politically motivated bans on showing his new film. The film was a success, and the Nazi hostility in the run-up to the premiere seemed to have subsided. In several German cities the SA tried to keep visitors away from the cinemas, after the transfer of power to Hitler in 1933 no more Chaplin films could be seen in the German Reich for 12 years.

The anti-Semitic Nazi propaganda film The Eternal Jew from 1940 showed Chaplin being cheered by Berliners in 1931. Chaplin (who was not a Jew at all) was presented as a representative of "international Judaism" along with other well-known personalities. Comment in the film: "It cannot be denied that a section of the German people clapped unsuspectingly to the immigrant Jews, the mortal enemies of their race."

City Lights is one of Chaplin's “great films”. For example, it has a positive rating of 98% on the US critic portal Rotten Tomatoes , with 41 of the 42 existing reviews giving the film a positive rating.

“An ironic and socially critical tragic comedy full of humanity, kindness and optimism. Although sound film had established itself in the meantime, Chaplin stuck to the silent film with musical effects and thus celebrated one of his greatest successes with audiences. "

Although it was not awarded a prize at the time of its release, the film was included in the 1991 National Film Registry , a directory of American films that are considered particularly worth preserving. The film can also be found in numerous leaderboards, including five from the American Film Institute :

Commons : Lights of the Big City  - Collection of pictures, videos and audio files
Films by Charlie Chaplin (from Mutual Films )