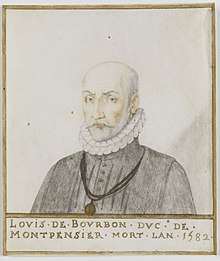 He was one of the royal army chiefs during the Huguenot Wars and was particularly noticeable for his religious inflexibility. He died at the age of 69.

Under the command of Duc Anne de Montmorency , he defended Provence in 1536 , then Artois against Emperor Charles V.

In 1538 he married Jacqueline de Longwy , Countess of Bar-sur-Seine , daughter of Jean IV. De Lonwy, Baron von Pagny, and of Jeanne d'Angoulême , the illegitimate half-sister of Francis I. On the occasion of the marriage, the King of France gave up returned to her mother territories that belonged to the grandfather Gilbert de Bourbon-Montpensier , Count of Montpensier (a county established for the occasion), Counts of Forez, Beaujeu and Dombes. In 1543 he was awarded the Dauphiné of Auvergne .

As a result, he took part in the numerous wars against Charles V in part. He also fought in Saint-Quentin in 1557 , where his horse was killed under him and he was captured.

He may have benefited from the influence of his wife, Jacqueline de Longwy, on Queen Catarina de 'Medici . In the summer of 1560, Louis was appointed governor of Touraine , Anjou and Maine . In August 1560 he was commissioned to clean up the "disorder" caused by the Protestant uprising.

Jacqeline de Longwy felt sympathy for Protestantism , which her husband disapproved of. In 1561 he became a widower; In the same year his mother died, from whom he inherited the Duchy of Montpensier . He now became the most violent opponent of the Huguenots . He went so far as to condemn his children himself. He was so cruel that even his own commanders hated him for it. In 1563 he captured Angoulême and Cognac .

In 1569 he took part in the Battle of Jarnac , was appointed governor of Brittany and married (1570) Catherine de Lorraine (1552–1596), sister of Henri de Guise and Charles de Mayenne . He was actively involved in the preparation of St. Bartholomew's Night, fighting the Protestants in Poitou in 1575 and thus committed new acts of violence.

From his first marriage there are the following descendants:

He was "Duc of Montpensier", the 15th "Prince souverain de Dombes" and "Viscount of Brosses " ".