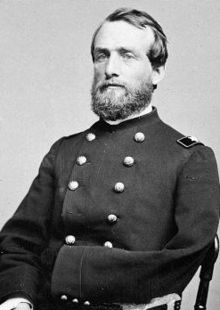 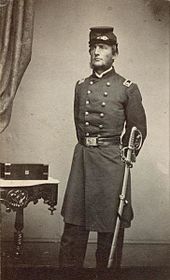 Lucius Fairchild, as a lieutenant colonel in the 2nd Wisconsin Infantry, prior to his promotion to colonel on November 17, 1862.

As a child, Fairchild moved to Cleveland with his parents . In 1846 the family settled in Madison , Wisconsin Territory . When gold was soon discovered in California , Fairchild also took part in the search for gold . He did not return to Madison until 1855. Between 1859 and 1860 he was a clerk at the district court. He was also studying law at this time and was admitted to the bar in 1861. When the Civil War broke out , Fairchild joined a Wisconsin infantry regiment . There he rose to brigadier general in the course of the war. Fairchild took part in many battles. He lost his left arm in the Battle of Gettysburg . Then he left the army. When he returned to Wisconsin, he was considered a war hero.

Between 1864 and 1866, Fairchild was Secretary of State of Wisconsin. Then he was elected as a candidate for the Republican Party for governor of the state. Fairchild took up his new office on January 1, 1866. After he was confirmed twice, he could officiate until January 1, 1872. During his reign, the country's welfare program was reorganized by merging six different departments. The newly created organization was named "State Board of Charities and Reform". After the end of his governorship, Fairchild received various diplomatic assignments. He was the American consul in Liverpool and Paris . He was also the United States Ambassador to Spain between 1880 and 1881 . In 1885 he ran unsuccessfully for a seat in the US Senate . Fairchild was also a member and intermittent commander of the Grand Army of the Republic Veterans Association . He later served on a commission negotiating land assignments in Oklahoma with the Cherokee Indians .

Lucius Fairchild died on May 23, 1896. He was married to Frances Bull, with whom he had three children.

Secretaries of State of Wisconsin