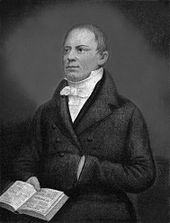 Ludwig Friedrich Heyd (born February 19, 1792 in Bissingen , Enz; † March 6, 1842 in Markgröningen ) was a historian and theologian. During his activity as a Protestant pastor in Markgröningen, he published several works on the history of Württemberg and the city of Markgröningen.

Heyd's parents were the princely councilor and Bissinger wood factor Karl Ferdinand Heyd (1755-1835) and Henriette Charlotte Luise, daughter of the Sindelfingen pastor Benjamin Hummel, who died on May 20, 1795. On April 10, 1796, Christophine Regina Zech von Liebenstein took her place as a stepmother. From the age of nine, Ludwig Heyd and his older brother attended the Eberhard-Ludwigs-Gymnasium in Stuttgart. In 1806 he entered the monastery school in Denkendorf and in 1808 in that of Maulbronn .

After his training at the Tübingen monastery , where he received his doctorate in history in 1812 and passed his first theological examination in 1815, he was a parish clerk in Althengstett near Calw until May 1816 . In the provinces, mentally underutilized, he went on an extensive educational trip through Germany, Austria and Italy in May 1816 with the support of his father, during which he met numerous intellectuals of his time. At the end of 1817 he became a repetitionist at the Tübingen monastery. In 1820 he came to Markgröningen as the “ helper ” of the pastor Johann Christian Glanz († 1823) and on November 26, 1820 married his daughter Wilhelmine Charlotte (1801–1867). In 1824, with the support of the community, he was appointed first pastor to succeed his father-in-law. A position that the historian and theologian, who is widely valued at his place of work, did not hold voluntarily until his death: he was refused a return to the academic world because his previously published works were politically inopportune.

Heyd had seven children with Wilhelmine, three of whom died early. When Heyd died in 1842, his son Wilhelm Heyd was only 19 years old. He also embarked on a spiritual career, but was only a pastor for a short time. In contrast to his father, he managed to turn his interest in history into a profession. He published a number of historical works and eventually became head of the State Library in Stuttgart .

Title of the facsimile edition of Ludwig Heyd's city history (1992) 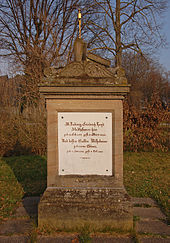 Like the pastor and author of the Geography and Statistics Wirtembergs published in 1787 , Philipp Röder († 1831 in Walheim ), Heyd was passionate about the history of Württemberg, on which, in addition to numerous magazine articles, he also published several more extensive works:

Heyd pursued an intensive study of the sources and emphasized this - apparently as a nod to contemporary historians - in the subtitles of some of his works, which he consistently provided with footnotes. For his three-volume work on Duke Ulrich, he also researched archives in Switzerland and Mömpelgard .

Heyd's request to devote himself professionally to the science of history was rejected by the authorities in 1830, as was the proposal by the Markgröningen city council to honor him for his scientific merits. The criticism of the sovereign spatial planning at the expense of Markgröningen, which was apparently too disrespectful in his town history, published in 1829, was politically not opportune and, according to Lenk, was "resented" in the relevant circles.

His story of the Counts of Gröningen , with which he refuted Memminger's derivation of the name of this Württemberger sideline, also did not fit into the political landscape and subsequently no longer received the attention it deserved. Current research confirms his source-based work.

In an obituary in the Swabian Merkur , citizens of Markgröningen confirmed that he had always carried out his office “conscientiously and fearlessly, sensibly and benevolently”. The cities of Bietigheim-Bissingen and Markgröningen have made Heyd an honorary citizen because of his contributions to city history research. In Markgröningen, the primary and secondary school and a street are named after him.

Hermann Römer , who also worked in Bietigheim and Markgröningen , continued Heyd's urban history works. The Working Group on History Research and Preservation of Monuments in Markgröningen has reissued Heyd's history of the former Oberamtsstadt Markgröningen for the 200th anniversary of Heyd's birthday in 1992 as a facsimile edition and in a brochure published some letters signed with "Louis" to his family, in which Heyd wrote from his 1816 to Research trips undertaken in 1839 reported.