Mark Charles Teixeira , nickname Tex , (born April 11, 1980 in Annapolis , Maryland ) was an American baseball player in Major League Baseball (MLB). He was active from 2003 to 2008 at various MLB clubs and played for the New York Yankees team in the American League (AL) from the 2009 season until his retirement in 2016 .

Teixeira grew up in Severna Park, Maryland, where he played baseball for Mount Saint Joseph High School in Baltimore . He was drawn in 1998 as a high school player by the Boston Red Sox in the draft, but turned down the contract and decided to play for Georgia Tech College baseball. In 2001 he reached a batting average of .427 there and won the Dick Howser Trophy for best college baseball player in the country. 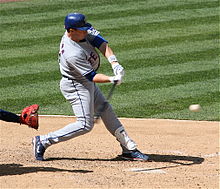 Teixeira on strike for the Texas Rangers

2001 Teixeira was again included in the draft and was drawn as the 5th pick in the 2001 MLB Draft by the Texas Rangers. Teixeira began his professional career in the Florida State League in the 2002 season and quickly rose to the Double-A League. As early as 2003, the Rangers Teixeira moved into the Major League squad; in his rookie season he had a batting average of .259 and 26 home runs. In 2004 he was able to improve these values ​​to .281 batting average and 38 home runs. In the 2005 season he won both the Silver Slugger Award for best hitter in first base position and the Gold Glove for best defender in this position. That year he was also elected to the All-Star Team for the first time, in which he hit a home run. Overall, Teixeira achieved a .301 batting average, 43 home runs and 144 RBI in 2005 .

Teixeira signed a two-year deal for $ 15.4 million prior to the 2006 season. The 2006 season got off to a sluggish start for Teixeira, with only nine home runs before the all-star break. At the end of the season he still had over 30 home runs and 100 RBIs and was one of the best batsmen.

Teixeira played 507 major league games in a row up to June 9, 2007, which at that time was the second most consecutive games after Miguel Tejeda; this series ended with an injury (pulled quadriceps).

Teixeira at the Atlanta Braves 2008.

In June 2007, Teixeira turned down an eight-year contract for $ 140 million from Texas Rangers and moved to the Atlanta Braves .

Teixeira made his debut for the Braves on August 1, 2007; he hit a 3-run home run in that game against the Houston Astros and scored 4 RBIs in a 12-3 win. He hit a home run in the next two games as well.

In the 54 games he played for Atlanta in 2007, Teixeira hit a .317 batting average with 17 home runs and 56 RBI. The Braves extended his contract for another year for $ 12.5 million, but Teixeira was transferred to the Los Angeles Angels in July 2008 . For the Angels he had a batting average of .358 with 13 home runs and 43 RBI in 2008, helping the Angels to their first season with 100 wins in their history. After the postseason , Teixeira became a free agent . 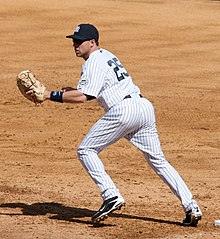 Teixeira at First Base for the 2009 Yankees.

In December 2008, Teixeira agreed to a deal with the New York Yankees early : he signed an eight-year contract for 180 million US dollars and was formally Yankee on January 6, 2009. The contract also contained a no-trade clause and an extra signing bonus of $ 5 million. In addition to the Yankees, the Angels, Boston Red Sox , Washington Nationals and Baltimore Orioles also bid for Teixeira. The Orioles fans were outraged by his decision not to play for his home team; In the Yankees' first game against the Orioles, the Orioles fans booed him and threw Monopoly money after him.

In the 2009 season, Mark Teixeira led the American League in terms of home runs (39, tie with Carlos Pena) and RBIs (122). He also won his third Gold Glove for outstanding defensive performance.

The 2010 season got off to a weak start at first; in April, Teixeira had a batting average of just .136. However, during the season he was able to improve and bring his batting average to .256 with 33 home runs and 108 RBIs. With 113 runs he led the American League, in the home runs he was 4th. Defensively, he performed very well with only 3 errors and a fielding percentage of .998 and was awarded a Gold Glove for the fourth time .

In 2005, Mark Teixeira became the third player, after Eddie Murray and Chipper Jones , to hit more than 20 home runs in each of his first three seasons. He is also one of five players who have achieved more than 100 home runs in the first three seasons. The total of 144 RBI achieved in 2005 is a major league record for a switch hitter. The $ 180 million deal is the third most expensive transfer in Major League history.

Mark Teixeira is married and has two children. He lives with his family in Greenwich, Connecticut . His uncle Pete Teixeira also played baseball (for the Atlanta Braves minor league team).